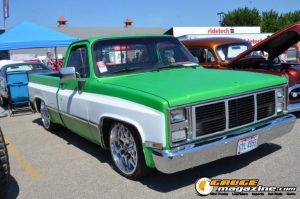 This show is known for being one of the biggest Good Guys shows in their tour, but this year topped it off.  With the crowning of the Top Street Rod, Street Machine of the year, giveaway vehicles, autocross, vehicle awards, and a very special vehicle display, this was the year you wanted to be there.

For 2019, the Street Machine of the Year went to a 1971 Maverick.  This ride is not normally known for those who are lovers of racing, but this Maverick is one-of-a-kind.  This ride holds a 427 Windsor based twin turbo with 1,200 HP.  We wouldn’t second guess the speed!

The 22nd Annual Good Guys PPG Nationals held a 50th Anniversary Celebration of the 1969 Camaro.  This celebration was a huge hit and brought in a total of 127 1969s.  It was a truly amazing sight to see as to what vision every owner had for their ’69 Camaro.  One of the Camaros that attended this celebration was the 2018 Street Machine of the Year winner; TUX.

For 2019, they announced that they would be giving away a 1969 Ford GRT-100.  After everyone waiting hours and admiring the ride from afar, the winner was announced as Gene Moberly of Lexington, KY.  Congratulations Gene!  The 22nd Annual Good Guys PPG Nationals also announced their giveaway vehicle for the 2020 show, a 1967 Nova built by Designer Street Rods.  Good luck to everyone for next years giveaway!