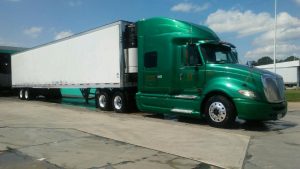 The average automobile likely weighs close to a ton and a half, or approximately 3,500 pounds. A car accident occurs when two such moving collections of metal and human flesh collide on the highway. Automobiles are not the only heavy vehicles moving rapidly down the highway, however. Contrast the average car to the immense commercial trucks that share the highway, some of which weigh up to 80,000 pounds, and you begin to sense the vulnerability of the people riding in the car. You also gain a sense of how important it is that the drivers of such big rigs be as prepared as possible to take on such heightened responsibilities. Truck driver errors can quickly lead to devastating injuries and even death for others.

Most of the time, a truck accident on the highway is the fault of one party, and like as not, this individual was in the process of breaking the law when the accident occurred, be it an illegal lane switch, failure to signal his intentions, driving faster than the posted speed limit, and the like.

The government via the Federal Motor Carrier Safety Administration (FMCSA) sets guidelines for truck driversthat limit the number of hours they can drive to insure they have the opportunity to rest. Some drivers are tempted to break these rules to earn payment incentives, but no payment is worth the risk of harming or even taking the life of another.

Don’t Drive Under the Influence of Drugs and Alcohol

Drugs, whether prescribed or illegal, alter the way human beings perceive and process information. Alcohol is no less a drug than any other, and is perhaps the drug most abused by drivers. Mind-altering substances also impair a driver’s reaction time, motor skills, state of alertness, and decision-making skills.

There are more distractions today than ever before to distract drivers of all types of vehicles. Truck drivers not only must guard against these distractions by choosing to eat, talk on the phone, search the web, text, groom themselves, watch television, write notes and all other non-driving activities when off the road and no longer responsible for their own and others’ safety. One statistic demonstrates how commercial truck drivers have almost a 25% greater chance of causing a truck accident when they text and drive.

In conclusion, because they drive the largest vehicles on the road today, it behooves all commercial truck drivers to recognize their unofficial responsibilities that come with the territory of being a highway cowboy. Be alert and aware. Be patient with other drivers. Be smart, follow the laws, and stay safe. In short, when driving, drive. Don’t take chances and you won’t become a truck accident statistic.