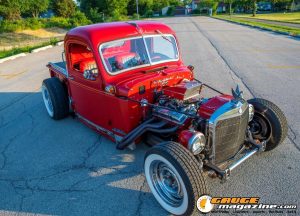 Original Cost
$400.00 for the cab
Build Cost
Approximately $8000.00
What was the inspiration?
Around ten years ago, I had just finished a 1929 Ford Tudor high boy. Rat rods were becoming popular and I just wanted to build something form scratch. Something different and unique. Growing up, I built model cars from scratch. As time progressed, my interest in creating and building did as well. I'm building my 3rd rat rod truck now.
How long did it take you to build?
I would say it took about a year and a half to build the Forty GMC aka Jimmy The Rat.
How long have you been building?
I have been building hot rods and rat rods for 10years. I am sixty-eight years old and a bit of a late bloomer when it comes to building hot rods. But I have been dreaming about them al my life.
Club Affiliations
I am a lone wolf.
Your future plans?
In the future, I plan to continue building hot rods and customs. My forty-nine Chevy coupe is next and then 1931 Chevy four door sedan street rod is next. Following that, a 1937 Plymouth four door sedan lowrider bomb will round out my stable.
Vehicle history
My 40 GMC began as a body and frame. I found a GMC grille at a junkyard and that is how it became a Jimmy. I didn't use the grill at the time and instead decided to build my own. However, a few years later, I found a Mercedes grill that I forgot I had during the build and I switched up again. But there was no title for the truck. It took four trips to the DMV in Springfield IL, to get the title. Now it is officially titled a "Specially Constructed Vehicle" instead of a "1940 GMC". I bought the frame from the same guy I bought the cab from. I bought the suspension pieces from Speedway and he welded every thing for me. After that, I read magazines and went to car shows to get additional ideas. I have not seen another painted rat rad similar to mine at a show yet.
Thanks to
Thanks to the high school administration where I worked for allowing me to build the truck in the metal shop classroom.
Previous Rides
The first build was a 1929 Ford Tudor High Boy. I sold this car to my buddy Dre who turned it into a rat rod.

Make
Chevrolet 1980's small block
Cylinders
v-8
Displacement
350
Engine Mods
It's stock, came out of pickup-truck in Arkansas. Has been running strong, have not done any work on it.
Engine Add Ons
Edelbrock intake and carburator.
Chrome or polish
A little here and there

Torque Converter
Yes it has one
Axle
Got it out of a Chevy truck at the junkyard
Builder Shop
School where I worked as a Dean of Students and at home.

Chassis
I think 2x3 tubing, built by Grahm's Garage in Windfall, Indiana. He also welded on all of the suspension components.
Mods to Frame
Zeed in the front and slanted kick up in the back.
Frame Builder
Grahm's Garage, Windfall, Indiana
Drop or lift inches
All static drop, it's about 4 inches off the ground, which means swerving around man hole covers and pot holes.
Front Shocks
Chrome Speedways
Rear Shocks
Coil overs
Spindles
Speedways
Springs
Front transverse from Speedway
Four Link
In the rear
Chrome, Paint, or Polish
Some chrome, polish when I take it to the shows, and it's painted New Holland Red.

Color
New Holland Red from Farm and Fleet
Paint Type
Don't know, but I mixed it up and poured it in a Wagner electric spray painter and painted it in the metal shop driveway.
Graphics Description
No graphics, pin striping by "Skully" of Bradley, Illinois
Painted By
Owner
Graphics By

Channeled
No
Hood
No, but I carry a tarp to cover up engine bay
Grille
70's Mercedes
Wing
No way, I cruise nice and slow
Addon Accessories
A lot of gingerbread, see pics
Body Mods
No mods to cab. Shortened 60's Chevy bed. Homebuilt stepsides and rear roll pan.
Body Mods by
Owner

Dashboard
Stock
Gauges
Sunpro w a stock speedo out of a 49 Chevy car.
Steering Wheel
red glitter from Speedway
Console
Homebuilt with a shifter boot made from a toaster
Head Unit
Pioneer
Amps
I don't know that, but I can crank it up enough to turn heads
Speakers
Got 4 Pioneers in the cab, two in the kick panels and two behind the seats.
Video System
Nope, too high tech for me
Stereo Installed by
My buddy Steve Taylor
Shifter
Lokar with extend chrome shaft with a clear crystal knob.
Seats
Junkyard buckets
Tint Percent
No tint, I want people to see who's driving this rat rod
Trunk or Bed
Shortened bed, the battery and toolbox is located under the bed floor. The gas tank is housed in a 1920's trunk in the bed under the read window.
Upholstery Description
Seats are tuck and roll.
Upholstery Description
See pics
Upholstery By
Mike's Upholstery in Olny, Illinois 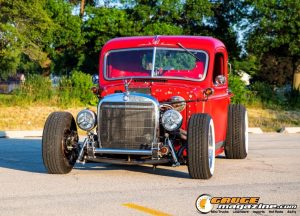