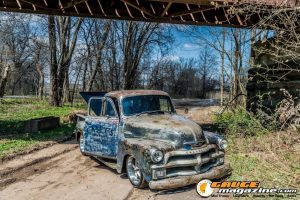 Original Cost
3,000
Build Cost
21,000
What was the inspiration?
I always wanted a 47-54 Chevy / GMC pickup, but didn’t like them stock. After falling in love with the patina style look, I knew I needed to build one, Every other one of my cars, has to be clean all the time and I always worry about scratches, paint chips, dents, and I’m the guy who parks in the furthest parking spot available, so I wanted one car that I would have to be obsessed with the paint and worry about scratches and dings.
How long did it take you to build?
6 months I worked on the truck on weekends and holidays only, came home from work Friday night and worked until dark(April 9pm) skipping dinner Friday nights for 6 months so I could get as much time in. Saturdays were from 8am-9pm at night, only stopping for lunch, Sunday’s were 8am-5-6pm only stopping for lunch. This includes 100 plus degree weather to 20 degree weather (started Memorial Day May 28th 2018 - November 2018) November 4th was its first drive in over 20 years) This was done Outside in my driveway under a pop up 10’x20’ tent. My garage was too small to do this into, so I had no choice to do this in the driveway rain or shine and a little snow.

Literally no one has touched this truck but me, EVERYTHING was done by me.  I had absolutely no help with the truck except for my wife and father in law help me lift heavy things off/ on like the bed.  My wife helped me install the new windshield glass since it’s a two person Job using nylon rope, other than that, it was all me.

I never performed a full on complete restoration before, let alone by myself in the driveway. the truck was rusted in the usual spots. There were many challenges, like welding in the new TCI independent crossmember. So many challenges for me , it sometimes felt like climbing a mountain, only to get over than mountain to see another mountain. I ordered the sheet metal from classic industries. I cut out and welded both lower cowl panels, both inner and outer cab corners, front floor pans, the left over scraps , I used to patch the bed sides, and the front and rear fenders. I wanted to make the truck look like it was never rusted before and I accomplished that . The original owner literally brush painted a silver paint on the truck I guess to help it stop from rusting. What I did was sanded the silver down to make it appear as a faded repaint coming through to the original color(the blue is the original color) and kbs satin cleared the entire truck. Found it on eBay, when I contacted the seller he said it was going off in two days and it already hit the reserve, I didn’t want to bid on it until I saw it in person (was a state over from me Maryland) I couldn’t see it until the weekend, which means I couldn’t bid on it. I saw it ended and reached out to the seller and told him if the winner doesn’t come through, to let me know I will be interested. Two weeks went by and I went to look at a few more trucks, but they just weren’t the right ones. I was literally about to call about another truck and before I could enter the whole phone number in, I received a text from the truck from eBay and he said the winning bidder never contacted his, so he said he would offer it to me before he relisted it, so I told him I’ll be there the next day. Went and looked at it and bought it.

How long have you been building?
This was my first ALL hands on build, my father was always building and fixing cars since before I was born, so I grew up with watching , asking questions and helping my father fix the families and friends cars. Going to swap meets since i was in a baby stroller .
Club Affiliations
None
Your future plans?
Would like to turbo charge it one day.
Vehicle history
prior to me it was a one owner truck. The original owner bought it brand new and used the truck every single day on his Maryland farm up until the day he died at age 98 (1998). The truck then sat in his barn for the next 20 years untouched until his wife passed away in 2018, the kids didn’t want the truck so that’s when I bought it. They originally couldn’t find the title, so they contacted the state and the state sent a new title, then they found the original title, so I was able to use the new title to put into my name and still keep the original title from 1954 in the original envelope that it came in. I have and still use all the original keys that came with the truck new and they still work in the ignition, doors and glove box!
Thanks to
My wife (Rachel Casey and the woman in the pictures ) who was 110% on board with this from the start, to when I first told her that I wanted to buy another car and build it, I though she was going to say don’t you have enough? Instead when I told her she was excited, especially when I showed her kind of the idea I wanted to do(she’s a car chick, her everyday car is a 6 speed manual 333h 370Z and her weekend toy is a 2014 Mustang GT 5.0L 6 speed track pack) she was even more excited. She was there when I went to look at the other trucks and when I bought this one, she was there when I needed her help to lift the heavy bed off of the truck, she was there when I needed a refill of my drink In the heat, or to make or bring me lunch so I could eat. She was there for the first firing of the engine, down to the first ride of the truck, she went to every swap meet with me to buy parts for it. she was there for me to vent on how things aren’t going right with the truck and I wanted to give up, giving me the confidence that I can do it. You get the idea. And my father in law who at a drop of a dime after I made a deal on the truck, borrowed a trailer and drove over 1 hour each way to bring it to my house
Previous Rides
I currently own all of these cars;

1988 GMC 2 door S-15 Jimmy, this was my first car that my father and I restored ,when I purchased it at the age of 14 in 1998. Currently has been redone from the ground up with a fuel injected Chevy 350 Tuned Port Injection from a IROC camaro and a manual 5 speed world class t5 trans , working heat and AC

2010 Chevy Camaro SS 6 speed manual trans(bought brand new, my first and only new car that I have ever purchased)

1986 Oldsmobile Cutlass Supreme (painted to look like a 1984 Hurst/Olds. This car has a 400hp Chevy 350 bored .40 over with a 5 speed manual transmission world class T-5. Also build from the ground up by me, this was my second car, and purchased it at 17 years old in 1999. Car has working heat and ac

1997 Chevy S10 pickup single cab, step side bed. I lowered it, redid the interior and suspension and I installed a Vortec 350 V8 with a 5 speed manual nv3500 transmission, working heat and ac .

Color
Original blue color, that had gray brushed it, faded through
Graphics Description
Original/Current color: Mariner blue, then it was brush painted long time ago with silver paint over the original blue and rust, I sanded a lot of the silver off to replicate a worn paint job exposing the original color and Patina and then kbs satin cleared the entire truck while it was torn apart. Bed wood—- composite decking wood with aluminum strips that I made out of flat stock
Painted By
Me
Graphics By
Me

Hood
Original
Grille
Original
Bumpers
Original
Body Mods
Original/Current color: Mariner blue, then it was brush painted long time ago with silver paint over the original blue and rust, I sanded a lot of the silver off to replicate a worn paint job exposing the original color and Patina and then kbs satin cleared the entire truck while it was torn apart. Bed wood—- composite decking wood with aluminum strips that I made out of flat stock
Body Mods by
Me 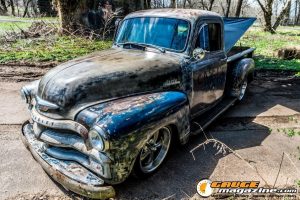 Why Must You Hire an Injury Lawyer After a Car Accident?

4 Common Signs Your Truck Has an Electrical Problem

Having Trouble Tracking Your Fleet? Here Are Some Tips

Defensive Driving Tips to Master Under Rain and Fog

Inoperable Car: Are They Worth It?

Safety Tips: How To Stay Away From Road Accidents