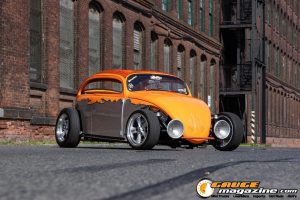 Original Cost
$3000
Build Cost
Boxes full of Receipts
What was the inspiration?
A blend between a hot rod and a low rider
How long did it take you to build?
Three years
How long have you been building?
25 years
Your future plans?
V8 bug With an LS motor
Vehicle history
Jorge Santos ( Jorgebug) built his hot rod vw or "Volksrod" As he calls it. Out of a worn out 70 sedan. The sedan was transformed into a rat rod. It was chopped cut and modified. Two years later the rat rod vw was transforms into a Volksrod. The Volksrod has a Tricky new look that is a mix of a early custom Lowrider and hot rod. The look is amplified by 4 1/2 inch chopped roof, door pillars, stretched out front end, and Big sunroof. The Volksrod has some very cool airbrushing and pinstriping both outside and in. The front hood is a 67 the rear deck lid is a 62.

The paint is a custom two tone house of kolors Pearl orange and Silver. Jorge also removed moldings and handles, welded every hole shut. After getting rid of the fenders and both aprons he fabricated a panel to install the gas tank.

The Attention to detail on this Volksrod is magnificent. 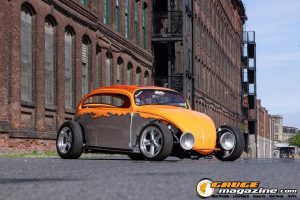 A Guide to Keeping Your DPF Clean

How To Help Someone Sober Up Before Driving Their Car Home

Why Do Dealers Insist on OEM Parts for Repairs?

What Must You Do After A First-Time DUI Charge?

Hit By An Uninsured Driver? Here’s What To Do Next

Car Upgrades for a Safer Vehicle