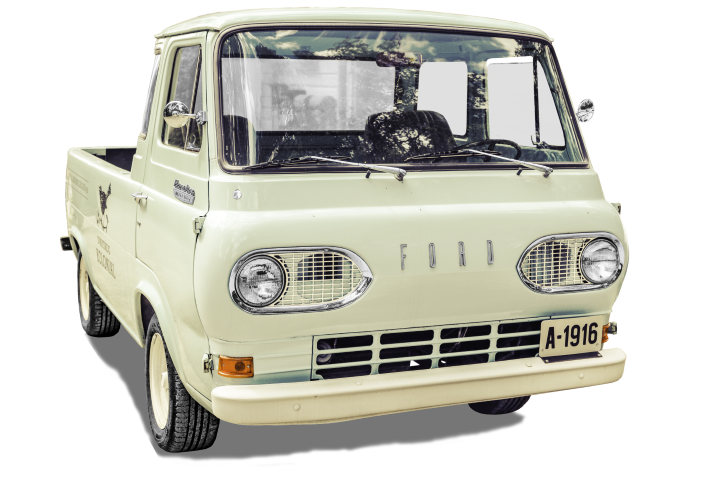 For most of its history, it seemed like the Ford E-Series van line could do no wrong. The Econoline had been America’s best-selling van for over thirty-one years. However, that all changed in 2013 when the company discontinued the once popular van type. These days the Ford Transit line has all but replaced the Econoline in sales.

So exactly what happened to the classic Ford van? In this article, we’ll be exploring the evolution of both the Econoline series and the Transit series. By the end, we’ll find out how the Transit eventually surpassed the E-Series in popularity. Let’s get started!

The Evolution of the Classic Ford Van E-Series

The Econoline/Club Wagon was first introduced in 1961. Throughout its fifty-three year run, it revolutionized the world of passenger vans. In this section, we’ll be covering the evolution of the vehicle through its four generations to its eventual end in 2014.

The design of the first Ford E-Series was based on the Ford Falcon car. The for-ward control van had a mid-engine configuration with the hardware located in between the two front seats. All of the first generation models used a six-cylinder engine — first an 85 hp 144 cubic inch inline before changing to a 101 hp 170 cubic inch inline.

At first, the Econoline was marketed as a van version of the Falcon that could fit up to eight people, but it eventually diversified into different cargo variants. Ford even introduced a pickup truck version of the Econoline, though the series wasn’t very popular.

The second generation of the Econoline was originally supposed to come out in 1967. However, a prolonged strike from the United Auto Workers prolonged the release until 1968. The new generation of the vehicle saw it shed almost all ties with its Falcon origins. Instead, it began marketing itself as a heavy-duty alternative more closely related to the F-series pickup trucks.

One of the biggest changes was the abandonment of the mid-engine design. Instead, a front-engine design was implemented along with a forward-facing axle that used the twin I-beam suspension layout. This redesign resulted in a much larger van. It also significantly changed the body. A conventional hood now allowed for engine access at the front of the vehicle.

Though the engines stayed the same, Ford began offering a V8 engine option on the Econoline for those who wanted a powertrain line. The company also did a redesign of the front-facing grille and added the option for sliding doors.

This generation of the Econoline was a complete redesign of the previous generation. Most notably it featured a huge change by adapting the popular body-on-frame design into a full-size van construction. This design lengthened the hood of the vehicle giving it the signature look of the E-series that’s recognizable to this day.

In this way, the van began to resemble the popular Ford Transit series found in Europe. The body of the vehicle utilized a two-box layout that would remain unaltered during its sixteen-year product run. This full-frame construction became popular with many utility vehicles. The design served as a basis for future ambulances.

In terms of the engine, the company designers moved the component forward in the hood and lowered it slightly. In an attempt to improve the fuel economy of the vehicle, Ford installed the new 6.9-liter IDI diesel V8. The van came in three different transmission options: 3-speed manual, 4-speed manual, and automatic.

However, the popularity of the automatic model eventually caused Ford to discontinue the other two after 1987. Another big improvement was the interior of the van. The changes to the chassis allowed for a lot more space within the van itself.

One variant of the third generation Econoline, known as the Ford Carousel, became the first precursor to the minivan. Unfortunately, this prototype was doomed due to a lack of funding.

For one thing, the company offered two different versions of the van — one with an extended tail section for people who needed more cargo space. The engine components also changed, from the 351 Windsor V-8 and 302 Windsor V-8 to the 4.6 Triton V-8 and 5.4 Triton V-8. Unfortunately, these changes weren’t enough to ensure the legacy of the E-Series.

Competitor vans made by Mercedes-Benz and Dodge we’re continually outselling the van series. By 2014 the Ford Transit was introduced to the North American market. In response, the company discontinued production on the long-running Econoline. These days the company does still manufacture the Econoline, but only for commercial purposes with a stripped chassis configuration.

The Evolution of the Ford Transit

The history of the Ford Transit begins in the United Kingdom in 1965. However, it would eventually overtake even the E-Series in North America. Since its introduction to America, the Transit has done undoubtedly well for itself.

In 2016 it accounted for 53% of van sales — even beating out sales of minivans. In this section, we’ll be tracking its growth through the series’ four different generations.

The first generation of the Ford Transit was also is the longest running. This is a testament to its great design and popularity in Europe. The Transit Mark I was specifically introduced to replace the Ford Thames 400E, which was a small, forward-control van with a mid-engine. In response to competitors, Ford switched to the front engine design found on the transit.

The American style design of the car gave the Transit a lot more space than other vans at the time, which only added to its popularity. In terms of engines the Mark I offered two sizes of the Essex V4 for a petrol option. The company also offered a 43 bhp Perkins diesel engine option.

However, this engine proved underpowered and was eventually replaced by the Ford Taunus V4 engine. Other minor changes were made throughout the history of the Transit Mark I to subtly improve it. For example, the front beam axle was introduced to get rid of excess noise and smell in the cabin.

The second generation of the Transit saw the introduction of the VE6. The biggest change here was the new body shell design of the vehicle. The one-box shell had the windshield and bonnet at practically the same angle. The engine carried over, though they did have to eventually replace it with a Cologne 2.9 EFI V6 due to emission standards.

In 1994 the company gave the VE6 a major facelift by adding a new version of the dashboard and nose. In addition to the facelift, the new model also featured a new 2.0 L DOHC 8-valve engine.

The third generation of the Transit borrowed a lot of its design from the New Edge style introduced by Ford in the new Focus model. The biggest innovation introduced by this model was that it came in both front- or rear-wheel drive purchase options.

For the diesel engine option, the company added the new Duratorq turbo engine to the mix. The petrol option on the other hand saw the introduction of the 2.3 L 16-Valve edition. Like the second generation, the third generation also received a facelift by 2006. In addition to new lights and interior systems, Ford also replaced the petrol engine with the one found on the Ford Ranger truck.

The Fourth Generation (2014 to Present)

The fourth-generation was introduced into the North American market in 2014. It did this with the Ford Transit MK 8. This new larger Transit model features a full-sized rear-wheel drive, as well as an attractive new edge styling. The company also made adjustments to the series for the European market to compete directly with competitors like Mercedes Benz and Volkswagen.

It did this by breaking with the product line and introducing the smaller Ford Transit Custom. This vehicle is a shorter version of the Ford Transit MK. 8 with a medium-sized front-wheel drive. If you’re interested in the Transit Sport, then make sure to check this new Ford site for some good deals.

Did You Enjoy This Article? Keep Exploring For More

We hope this article helped you learn the evolution of the classic Ford van. While the reign of the E-Series might be over, it has a great legacy that commercial vehicles continue to keep alive today.

Better yet, the Ford Transit has taken the torch as America’s most exceptional cargo van. If you liked this article, then you’re in the right place. We have a wide selection of articles on similar topics. So keep on reading to find something else that you’re sure to love.