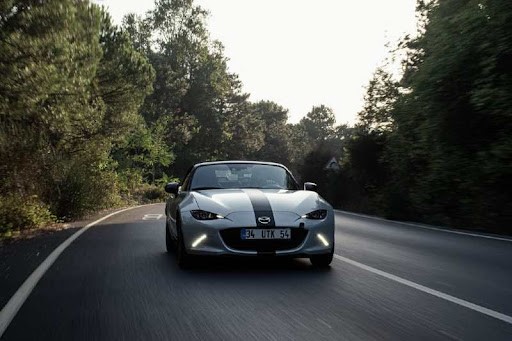 Few cars reach iconic status. In fact, few make it to a second-generation model. This is not the case with Mazda. They regularly come up with distinctive models that not only turn heads, but have set the direction for other carmakers, both in terms of design and technological innovation. the Mazda MX-4 was not the first with the RX-7 and its use of the rotary Wankel motor in the late 1970s, and then the marvel of small two-seat roadsters – the MX-5. The latter model was so successful, it has endured to this day, nearly four decades on and now in its fourth generation. The first Mazda MX-5 sold by the bucket load and created a backlog in orders. It also coerced other carmakers to come up with their own competing models. The BMW Z3/Z4, the Audi TT, the Lotus Elise and the Porsche Boxster are just a few names that take direct hints from the impact of the Mazda MX-5.

The formula for success was simple. Build a small, lightweight two-seater with enough power from a small four-cylinder engine to get you smiling. And that’s what it did. Maybe it didn’t have the most powerful engine (115 horses were on tap in the first 1.6 litre ), or the handling of a track beast, but the whole package appealed to buyers who were looking for something different from their daily drivers, something that was fun to drive and yet reliable. And didn’t cost a fortune. The rear-wheel-drive setup helped push things along, and being a convertible, you got all the sun and wind you’d ever want. Today, you can find cheap used models with decent mileage and relatively few mechanical problems.

Japanese car brands built their name on reliable and affordable cars. Though few experimented with new concepts, sticking to the tried-and-tested sales model. Mazda took another path and offered reliable models with a twist. Being built from scratch, the first MX-5 had few mechanical or electrical problems to speak of. The engine was robust, the electrics seemed fine and the unibody chassis and independent suspension could handle the car being thrown around in the bends.

The most common problem was the soft-top convertible roof, which was prone to blocked drainage rails, and water building up in the cabin as a result. This produced nasty smells inside, but also a bigger problem, that of rust forming along the sills. Water and debris also made their way in the front, from cracked or damaged mouldings and latches in the soft-top and windshield joints. Possibly the reason why Mazda went with the folding hard-top roof in the third-gen model.

Early models, from 1990-1991, with the 1.6-litre four-cylinder engine, had ‘short-nose’ crank issues, with loose pulleys resulting in crankshaft failure. Engines on roughly 1 per cent of Miatas sold in the UK needed crankshaft replacement. Mazda resolved the issue in later models and introduced the new 1.8 litre in the following years. Sticking to the engine, first and second-generation models have reported minor radiator problems, with leaking coolant, something Mazda recognised in adding a larger, beefier radiator on subsequent models.

Minor switchgear and electronic problems plague cars from the 2005 facelift, and the current model sold from 2015. There have been reports of jammed window switches, unresponsive sat-nav infotainment, faulty start/stop and tyre pressure monitors in newer versions. Quick software fixes should resolve these and any similar issues.

Mazda ranks high in the reliability and customer satisfaction rankings, so buying a used MX-5 shouldn’t cost an arm and leg if any problems arise. For first-gen models, look for any damage to body panel work, telltale signs that the car has been involved in a collision. Ill-aligned panels with mismatched grooves or mismatched colour schemes are a definite sign. Check for damage to the soft-top roof and if there are any cracks; a sign that there might also be rust underneath. Cars may have damp and damaged interiors, particularly seats and carpets if the water issues have not been resolved in time. If particularly worn, you may need to replace the existing seats. Also, look around for rust along the wheel arches. Lastly, tyres with uneven wear can signal damage to steering and here you’ll need replacement steering rack bushes. Decently priced mx5 aftermarket parts should fix most issues.

When buying used, you’ve got the option of choosing a car that spans four-generation models. Go for the first-gen model with the newer 1.8-litre engine and higher trim (including power steering, aircon and power windows), if you’re a sports car purist. Rated at 96KW, it weighed in a tad more than the older 1.6, had better acceleration times and fewer problems. You may want something more up to date, then opt for the third-gen hardtop with the 2-litre engine. It does add a little more weight, but the extra ponies more than make up for it. And if you want all the current tech, the present model with either the 1.5 litre or 2.0-litre engines should suffice. Look to spend anywhere from £3000 pounds for 2005/2006 cars with higher mileage, all the way up to £25000 for new-ish, fully-featured RF 2017/2018 cars.

If you come by any problems on your Miata, there’s a range of aftermarket replacement parts sold either catalogue new or sourced from other vehicles. The largest expense is changing the soft-top roof, which also means added labour costs. Next comes bodywork damage, which includes front and rear bumpers and front wing panels coming in at a few hundred pounds depending on the model. Most cars can have their exhausts upgraded, with stainless steel kits coming in at roughly £250 before labour. For the first-generation Miata, you might want to upgrade the stock suspension, especially in cars with higher mileage. All other minor parts, like regular brake pads and rotors, filters, switches and lights, and basic engine parts will be the same cost as any other car.

With street-legal tuned models on the market (from BBR tuners), and cars with turbocharged engines sourced from the Mazda MPS, the Mazda Miata represents an affordable, reliable and serviceable two-seat speedster that brings the fun factor back into driving. Zoom-Zoom!