SEMA 2019 2WD Trucks showed off exactly what they had this year and we could not get enough!  With this year being our 20th Anniversary of attending SEMA, we feel that this year was the year for the 2wd trucks! 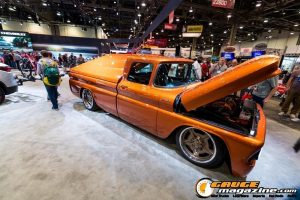 One ride that caught our eye was located over in the Chevy Booth in Central Hall.  Looking at this 2WD truck, you would think that you are seeing an old school C10, but looks can be deceiving.  This is actually the new Chevrolet E10, known as the “future of hot-rodding.”

Chevrolet wanted to keep the vintage appearance from the 1962 C10 pickup truck but then they added a modernized electric drivetrain.  The electric parts came from the Chevy Bolt EV and electric crate powertrain which includes electric crate motors, batteries, and automatic transmission.

“As General Motors continues to work toward our vision of a zero-emissions world, concepts such as this help us get there, while still supporting the enthusiasts who love to drive vintage vehicles.” (Business Insider, 2019)

The E10 was definitely an amazing sight to see and a great addition to the SEMA 2019 2wd trucks!

If you have owned or been around an electric vehicle, then you know that they are very silent.  With the Chevrolet E10, it is equipped with a sound emulator and three speakers.  Owner of the vehicle has five modes that they are able to choose from with the simulator: LS7 Z28 track tuning, LS7 Z28 touring turning, a V8 engine, a futuristic sound or silent.   Along with this, the sounds will change automatically with the changing of the gears.

We walked up to this C10 already loving it, but they tricked us and created this E10 that we are loving even more!

Be sure to check out all the other amazing 2wd trucks that attended SEMA, they were show stopping and we know you’ll love them!