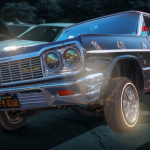 Lowriders are cultural masterpieces. The emergence of lowriders came from SoCal Mexican communities as counter cultural expression against the traditional use of mainstream vehicles. First seen on the streets of California in the 1950’s, lowriders became popularized later in the decade and well into the 1960’s. Since then, the cultural adaptation of lowriders became a worldwide … END_OF_DOCUMENT_TOKEN_TO_BE_REPLACED