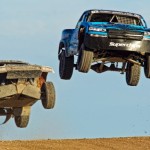 Robby Woods Doubles Down With Two LOORS Podium Finishes In Las Vegas The Lucas Oil Off Road Racing Series (LOORS) started the 2010 season at Las Vegas Motor Speedway.  It was here, just eight months ago, that Robby Woods suffered a spectacular crash in LOORS’ second race of the season.  In his triumphant return to Las Vegas last weekend for Rounds 13 and 14 of racing, the … END_OF_DOCUMENT_TOKEN_TO_BE_REPLACED