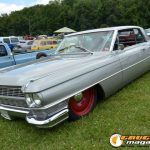 Camp N Drag 2017 Camp N Drag 2017 was held on July 14 through July 17, 2017 at Lake Waveland Park in Waveland, IN.  With 2017 being the 10 year anniversary of this event we all knew this year would be a record breaking year.  With over 1500 spectators and over 600 show vehicles parked through the showground, this was a HUGE record breaking year just as they thought.  Anyone … END_OF_DOCUMENT_TOKEN_TO_BE_REPLACED