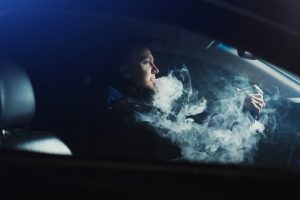 Vaping is considered to be rather an innocent activity. Surely, parents and teachers are concerned about the increase in the number of high-school and university students vaping, but most of them have made up mind to this tendency. They perceive vaping as a tribute to fashion and try to think of vaping as about some entertainment that is less dangerous than other, illicit, things.

Many adults support the tendency and switch cigarettes to vapes as well. The way of development of the vaping industry has increased recently, and now it is one of the most popular devices for consuming nicotine. One of the reasons for such popularity is a certain modern tendency for one thing to be a multi-tool.

Today you buy cigarettes, and they taste mint, to try the other taste or intensity, you have to buy the other pack of cigarettes. With the vape box mod kit (useful link), life is completely different. You can use different liquids and flavors for every vaping session and control the amount of nicotine consumed. Some even combine tastes. Such lightness tampers, therefore, so many people vape.

According to scientific data, vape pens, e-cigs, vape mods, and other types of vaporizing devices have about 12 million adult consumers in the USA. Using simple math, it means that almost every twentieth American uses a vaping device or several. For better visibility of the immediacy of the problem of vaping car drivers, let’s look through the statistics of car owners. The USA is ranked 5th in the world for the number of cars owned by people. The approximate number used for the rank is 811 cars for every thousand Americans, which means that almost every adult owns a car in the USA. If we take into account that some part of these thousand people is children, that means that some adults might have more than one car. The higher number is in some rich countries of West Europe, Australia, and New Zealand. Having made some calculations, we can claim that if 85% of Americans drive a car and more than 30% of the Americans drive, the number of people driving and having a car is huge.

BEING BEHIND THE WHEEL IS NO THE BEST TIME TO PUFF, WHY?

IS THAT ILLEGAL TO USE VAPING DEVICE AND DRIVE A VEHICLE? 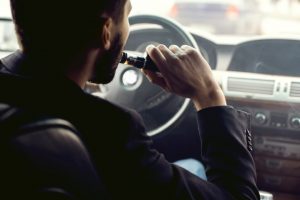 However, things are different in other countries. For instance, in the UK, if there is a person under 18 (formally a child) in a car, you could get a fine of £50 if you smoke or vape in the car. If you are not the driver, the driver is going to be fined as well. This works for all the drivers within England and Wales. In more complicated cases, when you drive and obscure your visibility with smoke, you might get a fine of £2,500, or get prosecuted.

Vape pens are not, strictly speaking, banned in the car. A car owner can use a vape pen, an e cig, or a vape mod if he or she holds a valid state-issued driver’s license and is able to control his or her vehicle and vape simultaneously. The main concern that drivers have about vaping is its safety in driving is how to combine relaxing and enjoying puffs of smoke and rigorous attention-consuming process of driving. If you are the lucky one, who feels confident about such a combination, you are safe in terms of laws and regulations.