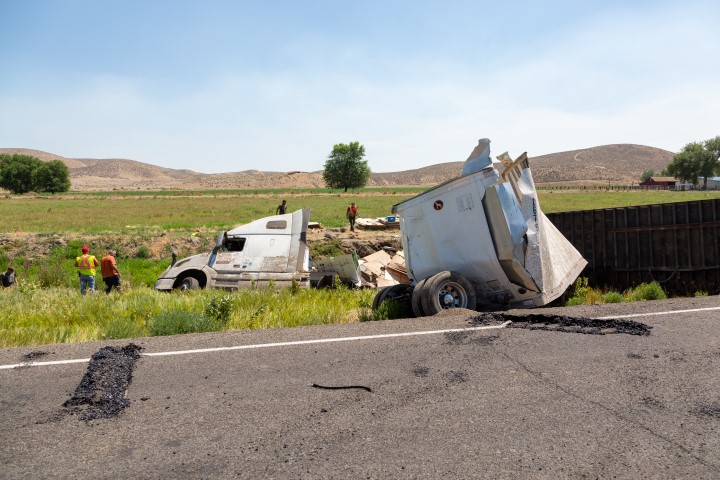 Statistically, when driving on a Thursday in the early afternoon, you are most at risk of getting hit by a large truck.  Truck Crashes Happen in the Early Afternoon more often than not.

The Insurance Institute for Highway Safety (according to 2019 data) found that the highest rate of truck crashes happened during this time of day.

In this scary scenario that happens far too often, drivers may find themselves boxed in between large, fast-moving trucks on a busy freeway or at a stoplight, with an oncoming truck heading straight toward them, with no intention to stop.

All told, large truck crashes kill more than 4,000 people in the U.S. each year; they are a leading cause of death for people traveling in smaller vehicles.

In-Depth: the Most Dangerous Times To Drive

It would seem like any time more cars are on the road, there is also an increased potential for accidents. This period includes both the work rush hours and the weekend. It’s also a common assumption that large truck crashes are more prevalent at night when visibility may be lower.

However, the most recent data available for large truck crash fatalities from 2019 reveal that most truck accidents happen midday during weekdays:

What Is Behind the Numbers

First, why do most truck casualties take place during the week? A probable explanation is that this is the time when freight haul is most usual. In contrast, truckers are less likely to fill the highways on the weekends.

Second, what about the day with the greatest number of fatalities? Why Thursday? By this time in the week, truck drivers may be less alert to shifts in traffic conditions around them due to fatigue from many hours behind the wheel. Also, they may force themselves to drive extra miles to get home for the weekend.

Last, why do the largest rate of truck casualties occur from noon to three p.m? The fact is, large trucks may accelerate more midday than during hard traffic times when congestion prohibits speed.

Besides, around three p.m. is the time when drivers may experience the hottest hour of the day. Or, occasionally, the hottest point is earlier, at noon.

Hot weather can wreak havoc on a truck, from brakes to tires. When conditions become very intense, brakes can fade, or the components can come to a limit where no supplementary heat can be assimilated, leading to lost friction. Also, tires could wear out quicker, and truckers may struggle with more flat tires or tire blowouts.

Driver errors could be another contributing factor to crashes. Errors have many causes, such as driving too fast, following too closely, distraction, unfamiliarity with the roadway, or the already mentioned fatigue. Unfortunately, truck drivers sometimes violate hours-of-service regulations and drive when seriously fatigued.

The Impact of Driver Fatigue

Driver fatigue can lead to careless driving, decreased vigilance, lethargy, sleepiness behind the wheel. It can considerably diminish a trucker’s readiness to operate carefully and enhance the risk of injury and death to others on the streets. In dreadful cases, truckers have fallen asleep at the wheel with fatal results. The most substantial portion of fatigue related to big truck wrecks happens on straight streets at highway speed.

While there are telling signals of truck driver fatigue, such as taking longer to react to situations, it’s tough to work out a driver’s alertness level or the degree to which the long working hours contribute to sleep deprivation.

There are studied patterns when accidents involving large trucks are more likely to take place. But the fact is that a severe accident can occur any moment a driver is distracted or cannot remain adapted to developments in traffic conditions. When sharing the highway with large trucks, recognize that big rigs have limited maneuverability, blind spots, and longer stopping distances. Try to remain out of a truck’s blind spots. If a truck driver signals a turn, provide them extra room to swing wide and carry out the turn carefully. Don’t cut in front of a truck and force it to stop. It can take the length of a football field for a tractor-trailer driving 65 miles per hour to stop.

Sean M. Cleary is a Miami truck accident attorney, founder of The Law Offices of Sean M. Cleary. He has over 20 years of experience representing people who have incurred severe, life-altering injuries and losses in truck accidents.