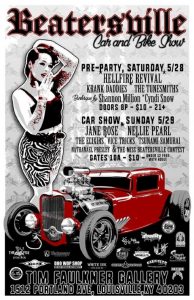 Beatersville has been known as a massive party for anyone who enjoys old school traditional customs rides and the hot pin-up women! Even if you aren’t into the old rides, don’t worry! There are still some not so traditional cars and trucks that will be sure to catch your eye.

At Beatersville 2016, Patrick Hampton won the Beater of the Year award with his ride, The Panty Dropper. Although this Sedan is not street legal, Patrick built this ride because he loves going fast but made a promise to his family that he wouldn’t let racing consumer him; which is also why the Sedan would not pass a safety inspection at a drag strip.

Looking for more on Beatersville? We have years of previous Beatersville coverage.   Gauge Magazine has been covering Beatersville since the beginning.