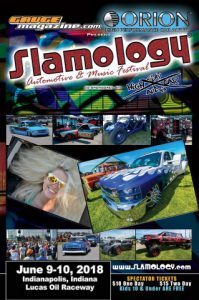 Every year there seems to be a friendly competition between the trucks and the cars.  We were expecting to see some of the coolest cars come and show off what they got, but we were blown away with what everyone brought to the show!

On Friday, those who were needing to register or had pre-registered were able to come in and pick up their packets for them to get into the show on Saturday and Sunday.  Participants were coming from all over the United States, even from around the world!  Friday is more than just picking up the packets for most, it also gives them a chance to show everyone the hard work they have put into their ride as they cruise their way out of the Raceway.

This ride owned by Greg Fields was not only seen all around the show, but heard as well!  The zombies that were inside the cage would “come to life”, a gun on the front would make the sound of shots being fired, and flames would shoot out into the air.  Everyone at the show was loving this ride!

The show was up and running early on Saturday morning as the line to get in was miles long!  As people began to flood in, everyone was seen trying to find a perfect spot to show off what specialties they have on their cars.  The cars of Slamology 2018 did not prep us for what they were bringing this year.  Each car that passed any staff, judge, spectator, or attendee was amazed.

The weather may have not been on our side Sunday, but many were still in it for the show.  The Cars of Slamology 2018 were doing their last few cruise laps, staying hidden from the rain but still showing off what they’ve got.

We cannot thank you all enough for another amazing year of Slamology!

Wanting to see previous years of Slamology Cars?  We’ve got that coverage just for you!