Down4Dennis was held at Princeton, West Virignia on August 7th, 2021.  Altogether this was a great event. Just over the Virginia/West Virgina line in the town of Princeton at the Ramey Chevrolet dealership is where this year’s event was held.

Rolling in around 10am and the event parking for participating vehicles was already 90% filled in. Out front of the dealership you could find some heavy hitter vehicles on display fully opened up. As you made your way to the rest of the event area you could find everything from off-road jeeps, bagged mini and full-sized trucks, classic cars (some fully custom and some completely original and restored), imports/tuners, lifted trucks, a right hand drive imported van, rat rods/custom rods, and anything you could think of. In front of the show care area was the a section for members of XTREME Lowz to showcase their vehicles. 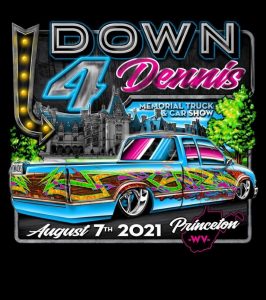 Off to the far side from the show was an area for the Stunt Army motorcycle group. During various exhibitions throughout the day, you could spot wheelies, burnouts, riding standing up on the seat and many, many other tricks to WOW the crowd of spectators throughout the day. Later in the afternoon came the lowcar limbo with cars and mini trucks trying for their chance to be named lowest of the show at Down4Dennis.

With all of the entertainment throughout the day you also had vendors up from selling shirts, hats and other apparel, one vendor selling custom cups, some selling beauty products for the ladies and of course the down4dennis booth. at this booth you could buy event t-shirts, raffle tickets to put in buckets for various items. you could also purchase 50/50 tickets as we well as the auction later on. Proceeds from the bidding went to help out a very well known pinstriping artist in the car scene (Jerry Dow) and his wife.

All in all it was a great day had by all and everything was finished and packed up just in time before the storm hit. This is one event we highly recommend everyone attend!