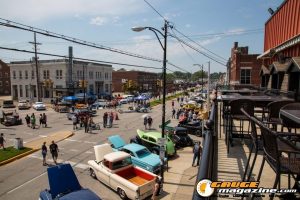 Eville Shindig 2019 was held in Evansville, Indiana on September 1st, 2019. For a long time this show has been known for having some of the sickest pre-1968 hot rods, customs, trucks, and motorcycles from all around the US.

Although the show is a one day event, you can make it last a little bit longer by attending the pre-party on Saturday August 31st from 6-12pm inside Pistons Bar.  This pre party allowed for everyone to get together and enjoy the live performances from “Hi Jivers”, The Royal Hounds, and Lara Hope & The Ark Tones.

The Show started at 12 pm and people started rolling in ready to see what everyone had brought out to the show! It was an amazing time to see everyone go around and have such an amazing time while not only enjoying all the rides but enjoying each others presence as well!  Started at 3pm, it was time for the infamous Eville Shindig 2019 Pin Up Contest to start!

All of the women who attended the Pin Up Contest were absolutely beautiful, congratulations to the 2019 Miss Eville Shindig Stella Noir!

At 6pm, Awards started.  They were given for Top 8 in each class, Best of Show, and Club Participation.  If you car club brought out the most registered vehicle, you were given $500 and a hand made trophy! There were also award for the best Cycle, Best Rat Rod, Best Hot Rod, Best Gasser, Best Kustom, Best Truck, Best Lowrider, and Best Stock Classic.  Each winner was given an award and a prize of $100. Best of Show was also given a trophy with a prize of $400.

Congratulations to the following:

Eville Shindig has their 2020 show scheduled and if you haven’t attended, you’ll want to make sure to make it on October 16th-18th, 2020!