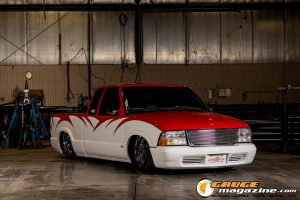 Original Cost
18,000
Build Cost
unknown - been built a couple of times
What was the inspiration?
I did not build the truck, I acquired it built already with this paint scheme and coloring. I have redone several components in the suspension and electrical as well as audio in the interior.... The Cat in the Hat being a childrens book, is a great way to get the kids into looking at the truck. I usually have a case of Hot Wheels with me. I give the Hot wheels to the kids, putting a big smile on their face...
How long did it take you to build?
I have had the truck about 16 months and I have had the bed off and inspected for proper build, and ended up welding in the "bolt in notch kit" that had been installed, as well as welding the bracing. I installed new Monroe shocks on all four corners as well as new bags and air lines all the way around. I had Paul Howard go through the interior and replace the older style shaved oor handle latch kit with a newer up to date unit, a new Sony head unit, 6 new subs in the extended cab area, build a new sub box and cover it and a new 7 switch air ride control unit. I have put in a new yellow top battery and redid some of the old wiring under the hood. I also put in LED tail lights as the original bulbs were hard to see with the cadilac styled tail light assemblies.
How long have you been building?
I am old.... I have been working on cars with my dad growing up and painting my own vehicles, although I did not paint the Cat in the Hat. I have painted several other show trucks and motorcycles in the past. MY first mini truck was a 1989 Isuzu Pup with a regular cab. I cut out and fabricated bracing for a walk through style interior in that truck and then ended up doing this on several other trucks back in the day.
Club Affiliations
Friends with several guys in the midwest, like Twisted Koncepts and Severed Ties, but have not petitioned to join any at this time.
Your future plans?
I want a medium duty truck to play with, put on air bags, and pull my other toys around with.
Vehicle history
As a teenager my first vehicle was a 1976 Camaro, daily driver, painted, wrecked, repaired and painted again. Wheels tires, air shocks to lift in the back..... Loved that first vehicle and have had several other Camaros and Transams through Generation 2,3, and 4. Got into Chevy trucks as well, have had several different generations of trucks, lifting or lowering for different looks through the years. My daily driver now is a stock suspension Z71 2017 Chevrolet 2500 HD LTZ and I love it, I am trying to figure out a way to keep it as my daily and still get the dream medium duty truck play with.
Thanks to
Thanks to Ron Moore and Jake Simmons for helping me get the truck, Alex Devol for helping with the frame reinforcement welding.... Special thanks to Paul Howard at #Handmadehoward for the awesome over budget interior mods with new Sony head unit and 6 NVX subs, alpine speakers, NVX amps, wiring to keep it from burning to the ground....and my wife Lucia Smith for thinking she was getting a new mini truck because how the hell was I going to fit in it, to drive it.....
Previous Rides
just some of my previous rides that need mentioning 1976, 1984, 1994 Chevy Camaro 1977, 1987, 1989, 1994 Transam 1989 Isuzu pup 2012 Dodge Durango 1962, 1976, 1988, 2015, 2017 Chevy truck 2007, 2008, 2012 Dodge Charger 2003 GMC Sonoma 1973 Porsche 914 Targa 1999, 2000, 2001, 2003, 2005, 2007 Yamaha Road STAR 1999, 2003. 2007 Yamaha Royal Star 2010 Yamaha FJR 2013, 2014, 2020 Can Am Spyder RT Limited there have been several other vehicles through the years, but these are the fun ones. (Again, I am old)

Color
red and white
Paint Type
unknown, with lots of pearl flake
Graphics Description
bottom half is white and top half is red. jagged line to seperate the colors, with black jagged pin striping. Cat in the Hat hand painted mural on rear tailgate.
Painted By
unknown
Graphics By
unknown

Cat in the Hat 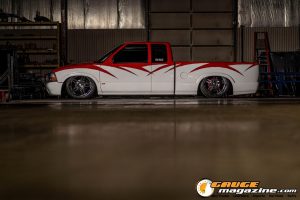 8 Tips to Washing Your Car in Winter

Motorcycle Accidents in Ocala: 7 Common Causes and How To Avoid Them