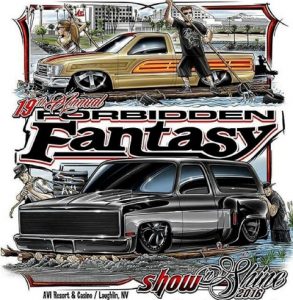 Forbidden Fantasy Show and Shine 2016 hit a new location this year on April 2-3, 2016 at the Avi Resort and Casino, and it was one choice that they will not regret. With this being their 19th year of hosting the show, Forbidden Fantasy was wanting the raise the bar from their previous years.  With a uniquely gorgeous location and an awesome selection of vehicles being shown, they raised the bar not only for their show, but for other car club events as well!

This K5 Blazer caught a lot of attention at the show this year! This is a unique ride seeing as it started off as a K5 Blazer then converted into a Dually by Eduardo Gomez. Not only was it an eye catcher just because the concept is awesome, but because it was on the show flyer, tshirts, etc.

Forbidden Fantasy Show n Shine already has a set up date for 2017 and all of their event information on their Facebook page.  Just looking at the coverage of 2016 and the previous year’s coverage, this is the one show you’ll want to attend!

We have years of coverage for Forbidden Fantasy Show n Shine and we at Gauge Magazine make sure that you are given the best of the best when it comes to coverage!