After a 2 year hiatus due to covid, Formula Drift came back with a bang to Atlanta in 2021. The drivers were pumped, the packed house full of fans were pumped and if you couldn’t find any enjoyment in the weekend then the event was not for you. Friday started off with the paddock open for fans and spectators to walk through. They could check out the cars, watch teams in the pits getting them ready for warm ups and also purchase swag from the different race teams. Later that afternoon fans lined up as tables were set up for drivers to sit and autograph posters, hats, skateboards, ect.. from the drivers. 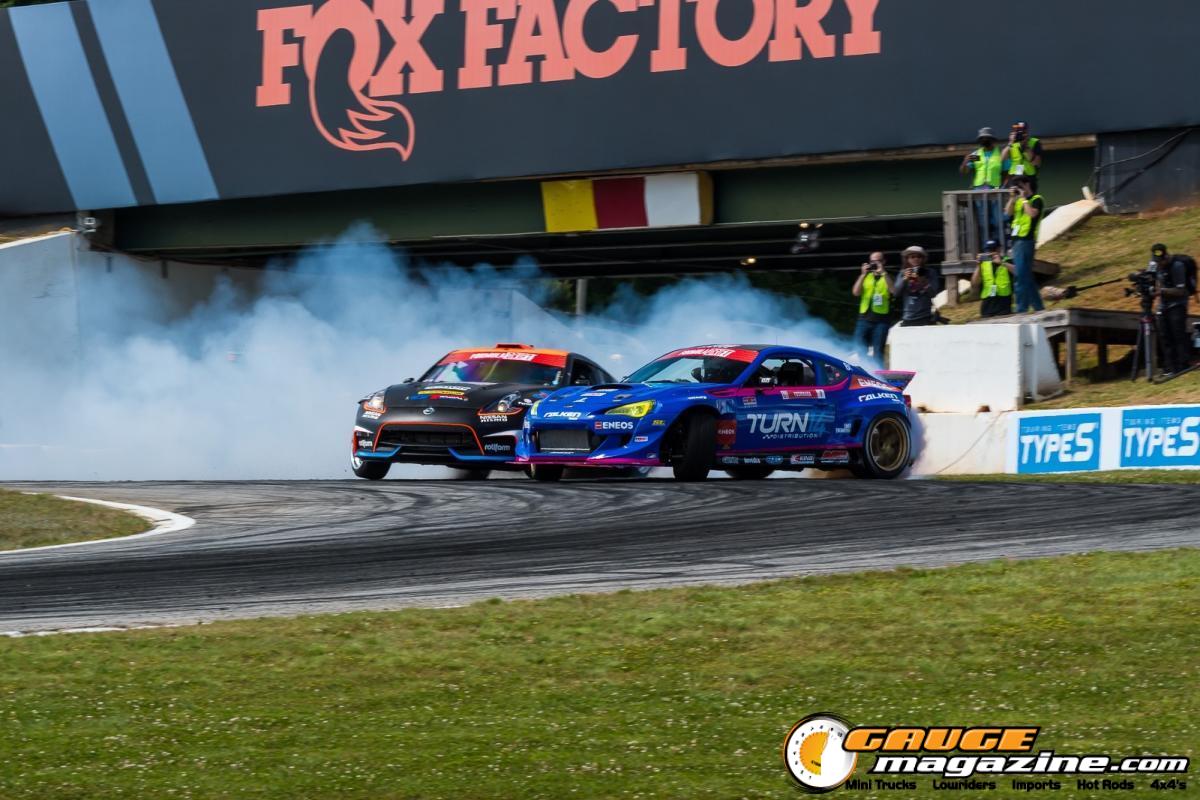 Once that time lapsed, the drivers headed to the track where they had a few hours of warm up where some drivers had never driven before while others it had been 2 years since their last time on this track. after practice was complete and a short break had, drivers set up for the new type of qualifying for the 2021 season. Each driver had a run through the course going through the allotted path trying to get as close as possible to each clipping point while trying to best their score on the 100 point scale. The top 24 guys maintained their spots for the next day while the bottom 8 had to re-run the course to determine their places of 25-32. Some drivers had performance issues or went off track during their first pass and received a DNF during their first run. 7 of the bottom 8 had DNF’s so they had a chance to redeem themselves. Some scoring as high as 90’s on their second run. At the end of Friday the pairings were complete and the bracket set 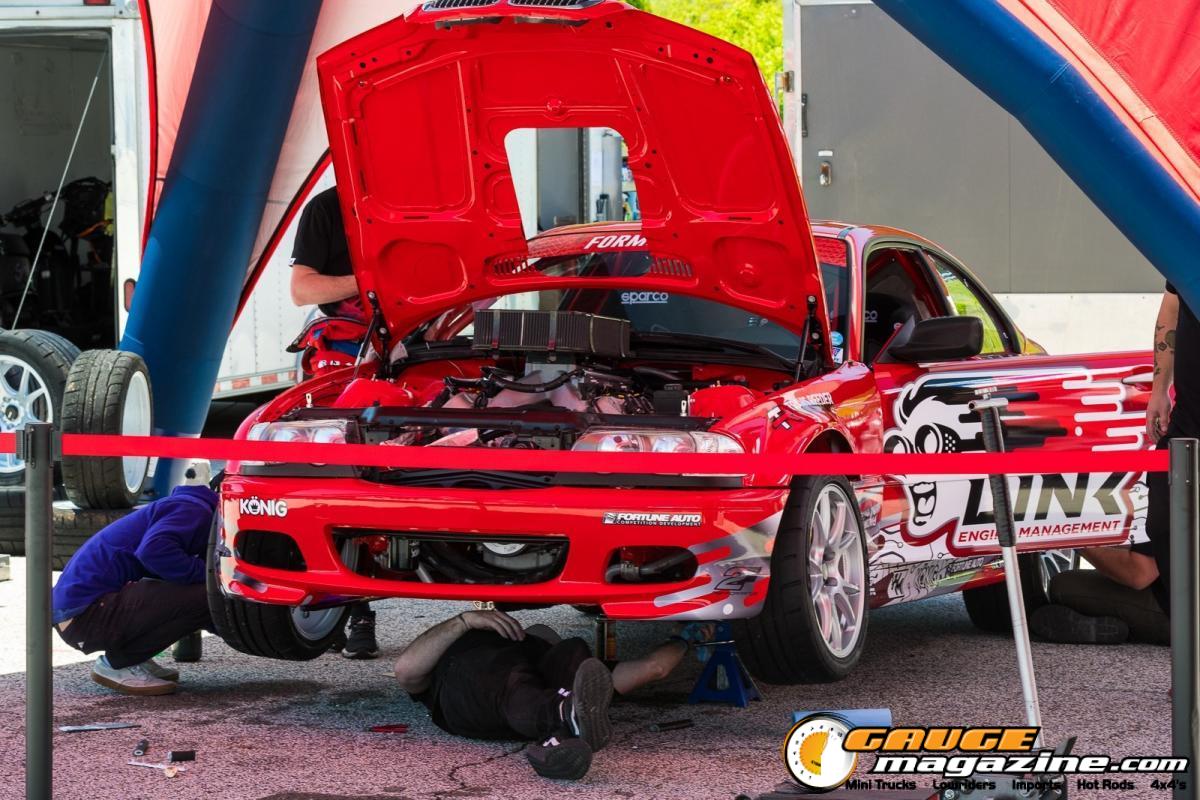 Saturday morning was another sunny day. bright and early you could see teams wrenching on their cars, making adjustments, banging on suspension, changing fluids, swapping tires and getting ready for top 32 competition. at noon the paddock was open for spectators but best believe this time the teams were focused on getting those cars ready. So fans were seeing their drivers and their teams hard at work. Before the top 32 you had an hour of warm ups that some saw a little bit of damage done to their cars while others were still working on their entry into the first clipping point. After that short period it was ‘go time!’. 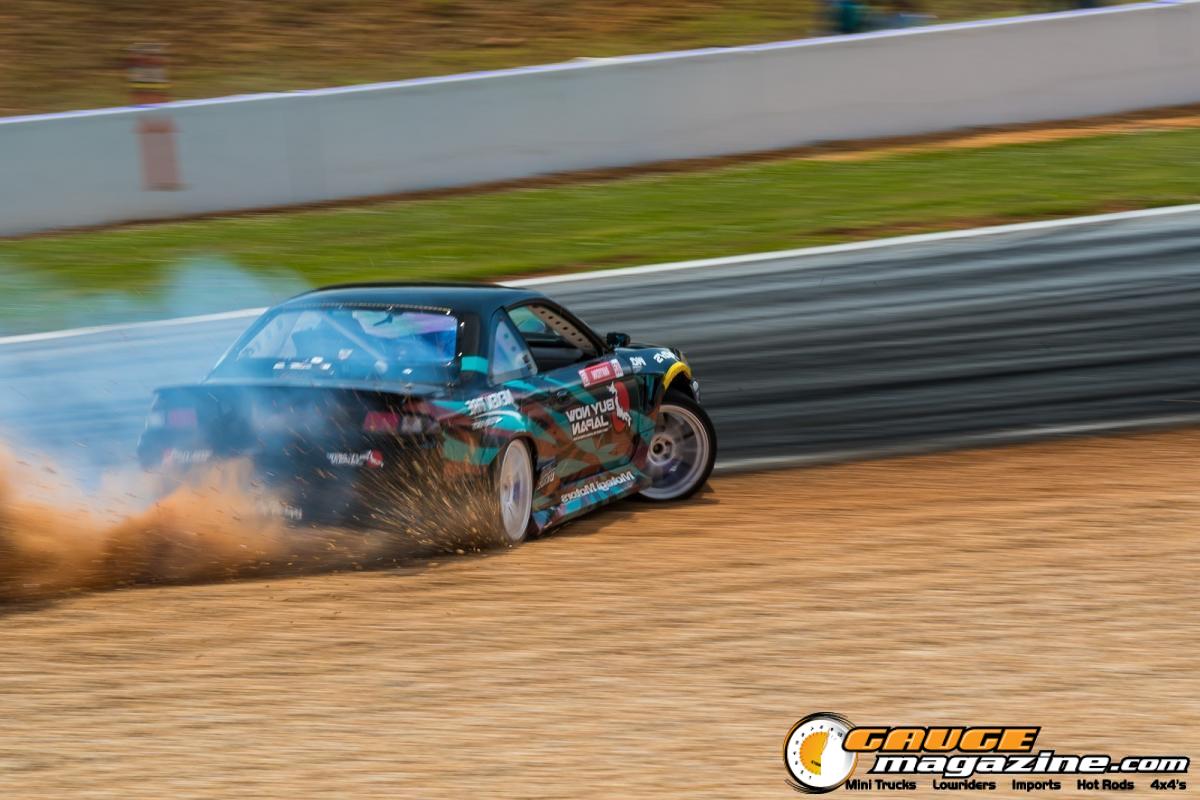 The first run between Jonathan Nerren and Matt Fields ended up with Nerren off the track while Matt finished his lap. After this Nerren called a comp timeout (which each driver is allowed once an event for 5 min to try to work on their car). That sort of set the tone for the rest of the top 32 as there were drivers with boost issues, motor issues, driving issues (suspension likely) or some just going off track. Sadly one even got lost in the smoke screen and went off track and hit the wall ending their weekend early. These issues caused the first round to go past the original scheduled time for break as each time the track had to be cleared up and cleaned by the awesome track and Formula Drift staff. Top 16 started the excitement after the quick 45 min break with several upsets occuring by some rookie drivers (Sorensen being the youngest Formula Drift driver ever at age 17) and upsets occuring by drivers such as Jeff Jones who were even down a cylinder during their heat. This really kept the fans on their toes. After the top 16 was over, there were a lot of surprise drivers that were out and some new faces making their top 8 appearances. 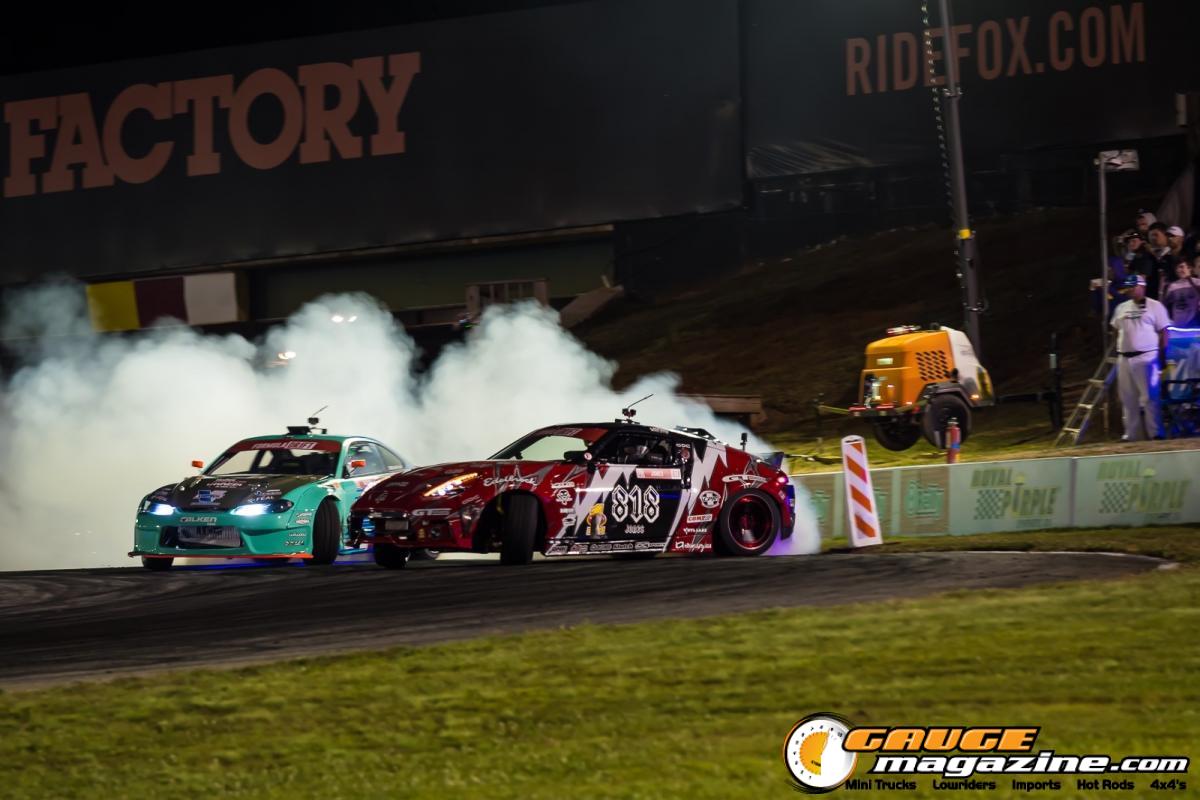 As the nite went on the drivers went more and more aggressive as the adrenaline was pumping through them. During the final 4, Vaughn Gittin JR was the first surprise out. That left another interesting scenario in changes for 2021. Instead of the 2 winners from the top 4 facing off for championship and the 2 losers competing for podium, 3rd place was determined by which of the 2 losing drivers had the higher qualifier. So if Jeff Jones had beaten Odi Bakchis, then Odi would’ve been considered 3rd due to qualifying higher than Gittin JR. If Odi Bakchis won, then Gittin JR would be on the podium due to qualifying higher than Jones. Jones was really wanting it and even promised fans that if he got to the podium, he would take the supercharger off his car and carry it up to the podium. Sadly the fans did not get to see that and Odi took the win putting Gittin RJ in the 3rd podium spot and leaving it up to the 2 falken boys Matt Fields vs Odi Bakchis. After a small collision between the 2, Matt Fields had to take his 10 min allotted time to make some repairs to his vehicle in between his lead and chase run. After his 10 min were up, they still needed a few more min to finish; so his team called the 5 min competition time out that allowed him to check the alignment all around and ensure he’s good to go. After that he and Odi were back ready to rock. They both went flying through with Odi in front and Matt chasing to which at the end, the judges decided they needed a ‘one more time’ to decide the winner. so the 2 took their allotted time to check everything, switch tires if needed or fuel up. After that it came down to one more chase and lead to which were extremely exciting and were very fast! a lot of the fans were actually expecting another one more time, but the judges made their decision. as the drivers pulled up to the circle, it was announced that odi bakchis was this round’s champion with matt fields coming in second and vaughn gittin jr as 3rd.

All in all it was an amazing weekend with at the racing so exciting you were on the edge of your seat.   For all information on upcoming Formula Drift events visit https://www.formulad.com/ 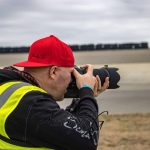 Text and Photos by Chris Gosda

Chris is a professional staff photographer for Gauge Magazine and manages his own photography studio and photography web site.  Check it out here. @cgphotos