If you have ever attended SEMA 2019, then you know that it is a tradition to attend the Freaks of Nature SEMA Kick Off Party.  The party is usually held over on 3rd street at the Hogs and Heifers Saloon but for the 2019 year the location was moved to 300 N Casino Drive next to the mob museum.

With the weather being the coldest that it has been for a while in Vegas and adding a location change for the Kick Off Party, that did not stop everyone from coming out and having an amazing time.  When the GaugeMagazine staff arrived at the show, there was already a HUGE crowd.

This year, Mickey Harris hosted a live art show that brought out 30 artist creating beautiful pieces that would be silently auctioned during the SEMA Kick Off Party.  All proceeds that were raised from the silent auction went to Nevada Childhood Cancer Foundation to raise money for the charity, this is one of the many reasons we love this party!

For the first time, the SEMA Kick Off Party welcomed in food trucks.  Black Tiger BBQ was in attendance along with Shasta’s Street Treats, you could smell the cookies and sweet treats being made from a mile away!

We love being able to be a special part of this show.  Every year, GaugeMagazine photographer Chromey, goes to the show and picks out one vehicle that he feels deserves a special award from us!  This year, the award went to Juan Trevino with his Chevrolet! Congratulations! 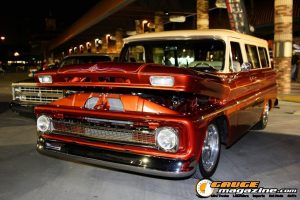 The Mini Truckin Hall of Fame came out to the show and announced those who would be inducted into the hall of fame.  Its an amazing time to see those recognized for their hard work, those presented with an award that they absolutely deserve.  Inductees are:

Congratulations to all inductees!

Thank you to Freaks of Nature and Shannon for putting on an amazing SEMA 2019 Kick Off Party as they have for many years.  We are beyond thankful to continue being a part of this traditional!