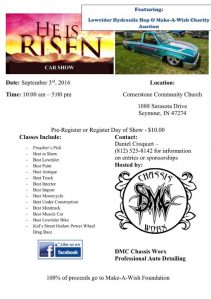 He Is Risen 2016 Car Show was held in Seymour, Indiana at the Cornerstone Community Church on September 3, 2016. The show welcomes are vehicles to come and show off their rides.  Trophies were awarded to those within the classes: Preachers Pick, Best Lowrider, Best Paint, Best Classic, Best Truck, and more!  Each vehicle that showed up was unique in its own way and showed amazing character and hard word from the owners.

This vehicle stuck out at He Is Risen 2016 for the fun and good looking graphics.  The hood of the “Mystery Machine” our favorite, showing Scooby-Doo in a scene he is typically not seen in.  Would you like to see this ride in your garage someday?

This year, the show had many sponsoring ranging from Cornerstone Chrch, Reelistx Airbrush, DMC Chassis Worx, and Make A Wish Foundation. He Is Risen 2016 had a Charity Auction, all money raised from the auction and donations were given to Make-A-Wish Foundation to assist those who are in need.  The show intends to come back for a 2017 Show held at the same location, Cornerstone Community Church, on September 2nd.

For more information on the upcoming 2017 show, you can contact Daniel Croquart at [email protected]

Interested in more from Gauge Magazine? We have years of previous show coverage from all across the United States!