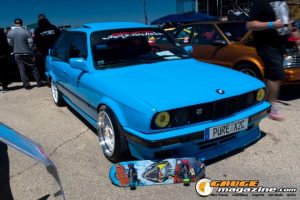 Import Face-Off was held at Route 66 Raceway in Joilet, IL on Sunday October 23, 2016.  Import Face-off Joliet is known for  being the most innovative Import series in the US with many activities that follow current market trends.  Fans come from all around the US just to spend the entire day enjoying the activities that follow current market trends, burnout contests, live sport compact fighting, stereo crank it up contest, and much more!

Although it was a chilly day at the show, Import Face Off Joliet make sure the show was still packed with racing, car show, and sound competition.  Cars from all around the US came in various brands, styles, and themes.  Import Face Off Joliet also brought in some extra entertainment this time around in the form on midget wrestling!  With the stage in a convenient location, between the car show and grand stands, spectators would come and enjoy the wrestling between races, it was a huge hit!

The track pulled in a wide variety of cars from various classes including test in tune!  Anything from your basic street car to a turbo diesel dragster were on the track making passes to get dialed in.  With the crowd going wild each time a vehicle pulled up and went off, you could tell that this event was a fan favorite for most!

Import Face Off is planning another show in Joliet for October 2017.  Make sure you get tickets and head out with your ride to this one of a kind show, you dont want to miss it!

Interested in more Import Face Off coverage by Gauge Magazine?  We have years of previous coverage for this show!