Indy Mecum Auto Auction 2021 was held from May 14-22, 2021 at the Indianapolis State Fairgrounds in Indianapolis, IN. Last year was the biggest year to date for the Indy show with the event reaching over $74 million in sales, but this year was even better.

If you are looking for vehicles that are one of a kind and will have a story behind them that many may not believe, this is where you need to be. Everyone who watches or has attended Indy Mecum Auto Auction 2021 knows that there are also featured vehicle and most of the time that is due to the story behind them. 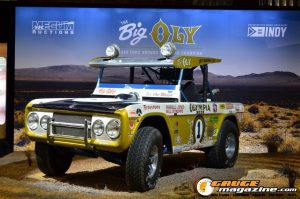 The most featured vehicle this year was a 1969 Ford Bronco ‘Big Oly’. This vehicle was owned by the famous Parnelli Jones.  This vehicle was created after a dare stating that “Jones was not man enough for off-road racing.”  He took that dare into his own hands and created what is known as ‘Big Oly.’

Another featured vehicle is a 1971 Plymouth Hemi Cuda Convertible. Being just one of 12 produced and this specific vehicle being only one of three equipped with the factory A833 4-speed manual transmission, this vehicle definitely deserved a feature vehicle spot.

You could also see a 1966 Chevrolet Corvette Convertible coming from the Dr. Mark Davis Collection.  Standing as the lowest -mile 427 Corvette from that year known, with just 11,400 miles.

This next feature vehicle has a lot of history behind it and Indy Mecum Auto Auction 2021 was beyond proud to have it there. 1930 Duesenberg Model SJ Rollston Convertible Victoria.  This is the only vehicle to be Supercharged from the factory and was purchased by band leader Paul Whiteman, famous for his arrangement of “Rhapsody in Blue,” on May 9, 1930. It was later purchased by G. Tucker Smith from the Duesenberg Factory branch in New York, who had a Rollston Quarter-Window Convertible Victoria body installed in 1935.

That being just a few of the vehicle available at Indy Mecum Auto Auction 2021, checking it out for yourself is something that is a must.  Every year we are blown away as to what the show has to offer and we are sure that will be the same for next year!