The Jason Strong Picnic 2020 was held at RNL Custom Suspension in Mooresville, Indiana on September 12th, 2020.  The event was held to raise funds for Jason Beck who was shot in a random shooting while driving with his family down I-465 on the eastside of Indianapolis on July 12, 2020.  Jason’s shooting was just a random act of violence and open gunshots at many vehicles on the highway.  Indianapolis Police have yet to solve this case.

Hundreds of Family and friends gathered together  to raise money for Jason’s family and trust for his children.  The day was amazing! 70 degrees nice light breeze and everyone was seen laughing and sharing great  stories that they have with Jason over the years at car shows from coast to coast.  Being a picnic the food was amazing and was prepared by Southside Cruisers out of Chicago.  I personally ate 3 tacos and washed it down with a ice cold beer.

To help with raising money Rob and his amazing family and staff were on the phone months before the event getting items for the raffle.  Tickets were $1 and after purchasing them you put your ticket in the items bucket you wanted to win.  By the end of the day when the winning tickets were being picked out the buckets were overflowing.  There was close to 100 different prizes, including: Scentsy packages, whiskey, lotions, shirts, Slamology registrations and shirts, hydraulic parts, custom air pieces, automotive collector items and so more. 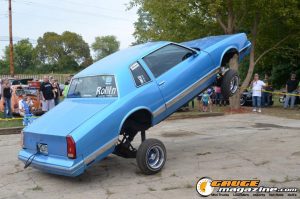 Awards and Raffle winners were announced at 5PM and following right after was the Hydraulic Hop Exhibition which we all know that was an amazing time itself!

All of the proceeds from Jason Strong Picnic 2020 went to assist Jason with his medical expenses as well the health and wellness of his children.  While Jason may have not been able to attend the event, we know that he would’ve been there early and ready to have some fun!

Since the event Jason Beck, passed away on 3-23-21 and is in God’s Hands now.   RIP Jason we will never forget your amazing personality, charm and being smashed at the Slamology Staff and VIP party in 2019! We miss you bro!  Godspeed my friend.

Rob and His family would like to give an extra special thanks to: Twisted Koncepts Car Club Gauge Magazine Crew GOOD TIMES LIFES 2 Low Relentless Car Car Club USE Car Club SouthSide Cruisers Chicago and any one else that took the time to honor Jason on this day!