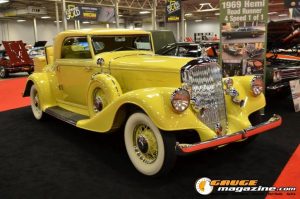 Mecum Auto Auction 2018 was held at the Indiana State Fairgrounds in Indianapolis, IN on May 15-20, 2018.  The auction is always an event that is widely watched, whether on television or in person.

This year was a very special year as a gentleman from Indiana planned to auction off 16 cars at the show, his collection of Corevette Indy 500 pace cars.  The collection included cars from 1978 all the way up to 2017.  While not every vehicle had paced the race, they were all used at the track in some way.  This was a first and very special event for the Mecum Auto Auction because this sale can never be duplicated again.

There is no other Auction like the Mecum Auto Auction 2018.  Each year someone seems to bring something more extravagant and valuable than the year before.  Seeing the amazing vehicles isn’t the only reason that we continue to attend each year, but also for the people who attend.  Mecum Auto Auction already has a show planned for 2019, be ready!

Interested in old school vehicles?  We have the coverage you need!

Looking for more information on Mecum Auto Auction?  Check out their website!