SEMA 2019 Domestic Cars killed it this year just like it does every year! SEMA draws hundreds of domestic cars from all around the world but they also bring in over 60,000 domestic and international buyers! Each ride seem to shine bright in its own spotlight and we know that you will be loving the domestic rides from SEMA 2019. 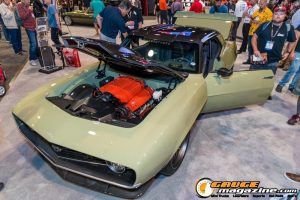 This year, a domestic car was titled the 2019 SEMA Battle of the Builders Champion!  A 1969 Chevrolet Camaro “Valkyrja” built by Jim and Mike Ring won that title.  This build was made for a customer located in Belgium, and when asking the Ring brothers about the cost of the ride, they would not state exactly what the owner paid, but they stated it was between $500,000 to $1 million.

The Ring brothers also had a doubt about this ride; the color. They knew that the Camaro itself would be sick no matter what, but they really did try to turn the customer away from the green exterior color.  It was a completely different turn of color from the vibrant colors that most muscle cars have, but in the end they felt the color was a perfect fit for SEMA 2019 Domestics.

Ever year, we try to see which category of rides took over this show this year, Imports or Domestic.  In all honesty, we cannot tell who did!  They all had amazing rides in their category and everyone, including the Gauge Magazine staff, were in awe at every ride in attendance.