SEMA 2022 Optima Ultimate Street Car Challenge (OUSCI) was held in Las Vegas, Nevada from November 1st-4th at the Las Vegas Convention Center.  OUSCI brought in live action to the SEMA show as the competition made a stop at the event!

The competitions Peak Performance Challenger and the Lingenfelter Design and Engineering Challenge took place for the first time at SEMA in 2021.  This year, they will return and their Autocross portion will makes it big debut at the show in the Bronze Lot!

Before the show, the performers goes through 5 other qualifying events spanning more than eight months in total. Those who are considered top performers from those 5 other regional events receive coveted invitations to complete in the final invitation that happens at the Las Vegas Motor Speedway. 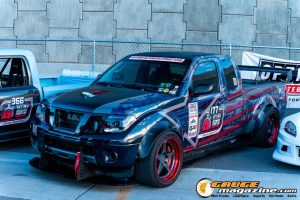 Those who attended SEMA 2022 Optima Ultimate Street Car Challenge were able to see a display of 100 competition vehicles in an area that is now known as OPTIMA Valley.  Nearing the end of the show,  the vehicles parade out of the convention center and make their way over to the Las Vegas Motor Speedway, where they will participate in their final five-part competition.  Last year, two of those segments were done at the SEMA Show, this year the event will showcase three!

For many, this is rare for them to be able to witness so many vehicle push the limits of performance and agility.   Especially getting to watch three of the five segments of the final competition happen in front of you is another mind blowing experience in itself!

We are thankful to have gotten to watch SEMA 2022 Optima Ultimate Street Car Challenge for the past two years, we cannot wait to see what the 2023 event will have in store for us!