SEMA Ignited 2021 was held at the Las Vegas Convention Center in Las Vegas, Nevada on November 5th, 2021.  If you are in Vegas as the same time SEMA is on, you’ll want to be at the Platinum lot early to get great seats to see the after party!

SEMA is known for being selective on who they allow into the show.  Many have to apply and while hundreds are accepted, many are denied as well.  If you were unable to make it in the show, SEMA Ignited 2021 is a way for you to still get to see the rides in attendance but also party with everyone for a bit as well. 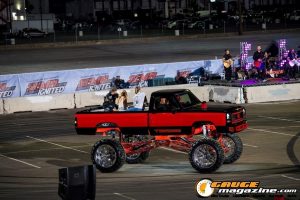 SEMA Ignited 2021 includes food, music, drift demonstrations, celebrities, hundreds of customized cars and trucks, new products in the industry, and the biggest hype of them all, this is when the winner of the Battle of the Builders in announced.

Congratulations to Robert Matranga who took home the title with his 1955 Chevy AKA “Brute Force.” Matranga and his entire team completely rebuilt this vehicle into the amazing vehicle it is now.  It was a tough line up to choose from!  The lineup for Battle of the Builders included:

Attending SEMA 2021 Ignited is something that almost every automotive enthusiast wants to attend, and if you were in the Las Vegas area you did not want to miss out!