Slamology 2022 Trucks was held in Brownsburg, Indiana at Lucas Oil Raceway from June 10-12th, 2022.  The trucks were the show stoppers this year by far!  Whether it was custom paint, body mods, engine mods, or audio; they made sure they brought it all!

After waiting all day Friday to get their registrations, the Slamology 2022 Trucks filled the raceway heading into their area to prep their vehicle for the show. Between the cruise lane and the judging lane, participants and attendees were able to see almost every truck in attendance.  Seeing everyone come together to discuss their rides was something we always love!

There was one truck in particular that took our breath away and the same for many others. Shane Andrews has built a beautiful show truck known as “Anchor Aweigh.”  The vehicle was built in memory of family members that had served in the US Navy and they gave an amazing tribute to them. Check out the pictures below and we know your mind will be blown just like ours was! 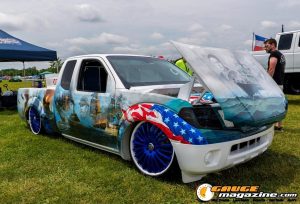 Congratulations to everyone who took home an award.  With what you all brought this year, we are on the edge of our seats to see what you have in store for next year!