If you were planning on bringing your ride to drag race, they asked that the ride be vintage styled, no current age styled drag cars along with no current style decals. 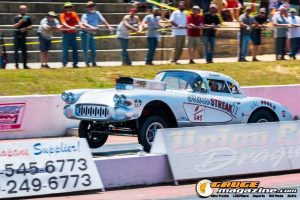 You were able to see some of the fastest gassers around; wheelies were done with almost every run.  With some being well known racers and some being fresh off the trailer, each round had you on the edge of your toes!

Saturday, you were able to see legendary Rat Trap AA/FAT, Ron Hope go against Dan Pettinato, Rat Poison.  You could also see Scott Shiffler in the Tin Man and Adam Pyle in the Dutch Blitz going head to head.  Southeast Gassers Association was also out at the show with a small group of cars doing exhibition racing!

If you were in need of a break from all the Grudge racing, you could go and enjoy show cars, race cars, automotive/apparel vendors, flea market, swap meet, concerts, custom campers and bikes, and so much more!

Steel in Motion Grudge Racing 2020 was an amazing time and we did not want it to end, but we will not miss out on the 2021 show!