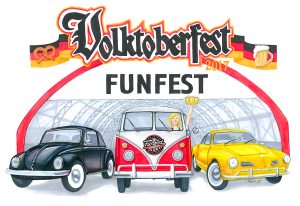 Volktoberfest 2017 was held in Fisher, IN at the Indianapolis Metropolitan Airport on October 14, 2017.  The show was put on for any Midwest Enthusiasts in hopes to bring everyone together one more time to show off their rides before the weather turned cold and the season ended.

Tom Wood came out and had a private collection of War Birds on display in the hangar for all to view.  They also allowed airplane rides which allowed for people to get great shots of the show from up above!  Tom Wood also brought along new Volkswagen’s, Audi’s, and Porsche’s which were provided by various dealership.

Volktoberfest had loads of entertainment with a DJ that was busting the beats and a swap meet that was set up for a VW treasure hunt!  There were amazing food vendors including Granite City Brewery handing out their always popular samples and other vendors of all kinds.  With a unique location and entertainment of all sorts, this may be the show for you!

The show was also doing a fundraiser campaign to help support a charity, Hoosier Veterans Assistance Foundation. (HVAF) HVAF is a non profit organization that provides food, shelter, and other support for Hoosier Veterans. Volktoberfest was asking those who came to bring a non-perishable food item to donate to the cause.  They also were having a raffle which all proceeds went to HVAF as well.  Volktoberfest also had a BloodMobile on site for anyone who was wishing to donate blood to save lives.

With this show being in a very unique location, having vendors of all kids and entertainment like no other, and showing so much care to those around them. this is one show that we will continue to attend each year!

Looking for some custom Volkswagens?  We’ve got that coverage just for you!