Detroit Autorama 2019 was held on February 28-March 1st, 2019 at the Cobo Center in Detroit, MI.  The Cobo Center was packed with around 850 phenomenal hot rods!  You could expect to see every type, style, make, and description of Hot Rod from all around the world!

Those who were in attendance were treated to not only the beautiful hot rods, but also special displays such as the tribute to the well-known custom car builder Carl Casper, the Lowrider Exhibit, and the 50th anniversary recreation of Chuck Miller’s Red Baron show rod.  If you attended Detroit Autorama 2019, then you know how amazing this show really was!

The Great 8 were also announced at the show and they as diverse as you can get!  The Fords, Chevys, a Cadillac, and a Willys, spanning a year range from 1932 through 1969.  One of these rides won the Ridler Award, and that was a 1959 Cadillac Eldorado Brougham, the CadMad. 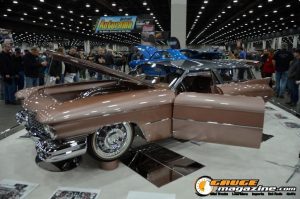 The Don Ridler award isnt given to just anyone, this award shows that the owner worked hard, had creativity, and talent that bears Don Ridlers name.  This year, the award was given to Craig Barton in honor of the owner Stephen Barton.

The 1959 called is known as the CadMad due to it being a mash up with a Chevy Nomad from the same era. CadMad is the result of 14 years of labor and a mounting amount of $2.3 million to complete. Even more, this ride has an amazing story behind it as well!

Owner Stephen Barton decided that he wanted to create an amazing ride that he knew would win the Ridler Award. So he went and picked out a 1959 Cadillac Brougham with a body by Pinninfarina, number 85 of only 99. Barton then sent it out to California hot rod builder Super Rides by Jordan.  Who then put in long days to make sure that this ride, would live up to the idea that Barton had/

Sadly, in January of 2018 Barton passed and was unable to see the final product.  Craig, Bartons Brother, finished the ride in his brother honor and was notably overwhelmed when the CadMad had received the Ridler Award.

Congratulations to those in the Great 8, Craig Barton, and Stephen Barton!

Needing information on Detroit Autorama 2020?  Check out their website!

Wanting more information on the Ridler Award Winner?  We have that coverage for you!