Remember when people thought that Station Wagons were lame? A 1959 Cadillac took home the Ridler Award this year and just wait until you see it!

The 1959 called is known as the CadMad due to it being a mash up with a Chevy Nomad from the same era. CadMad is the result of 14 years of labor and a mounting amount of $2.3 million to complete. Even more, this ride has an amazing story behind it as well!

Owner Stephen Barton decided that he wanted to create an amazing ride that he knew would win the Ridler Award. So he went and picked out a 1959 Cadillac Brougham with a body by Pinninfarina, number 85 of only 99. Barton then sent it out to California hot rod builder Super Rides by Jordan.

Here is where the magic begins. Super Rides, by Jordan Quintal and his son Jordan Jr., chopped the car and turned it into a two-door, adding the body panels and roof from a nomad. They then added a space frame chassis equipped with a 1025 hp 632 cubic-inch V8 from Tom Nelson Racing Engines. 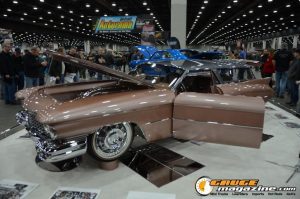 To keep the engine bay from looking cluttered and messy, the accessories were mounted and hidden away. In total, over 4,000 hours were spent on the car and Super Rides knew that they had made Barton proud.

In January of 2018, Barton had passed away and was unable to see the final product. Barton’s brother made sure that his dream for the vehicle continued on and was notably overwhelmed when CadMad had received the Ridler Award 2019.

Congratulations to Stephen Barton, his brother Craig, and those at Super Rides for completing and absolutely amazing ride. This raises the bar high for the next round of vehicles and owners who will be competing for the next Ridler Award!

Wanting more information on the Ridler Award 2019? Detroit Autorama has their website up with all the information you need!

Wanting to see more rides from Detroit Autorama? Check out the amazing coverage we have!