Driftmas Winter Matsuri was held in Rockingham, North Carolina on December 12th, 2020.  It was a big day for the east coast to have this show come over and make an amazing appearance!

MBDrift is a group that has put on drift events in Myrtle Beach for quite a few years. With their venue being shut down and demolished to build housing, they were looking for a new place for drivers to have fun and a venue to put on events. 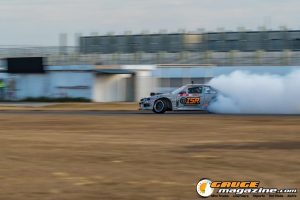 It just so happened that a group of investors purchased a rundown speedway that has been closed for close to a decade. Located across from an active speedway where many drag racing and car shows occur, it is exciting to have another venue up and running for the automotive community and the local community.

For this to be the first event at the Rockinham Speedway, it was far from a disappointment. It may have started off a little chilly and overcast, but the track went hot early that morning and stayed hot until later that night. Bringing in drivers from all over the east coast that ranged from beginners , some that are experienced in the grass roots drift world as well as pro-am drivers. It also brought up Dustin Hash and his “vette” truck that you could catch on Drift Week and even FD Drivers like Jonathan Nerren and Cory Talaska.

Drivers ran a majority of the day between two different tracks switching every hour between a short course full of turns and a longer course that could reach some high speeds on the straight always before hitting the long sweeps and turns.  Driftmas Winter Matsuri was definitely a hit for everyone in attendance from spectators to media and especially the drivers. The group already announced their 2021 event schedule and it looks to be a full one!