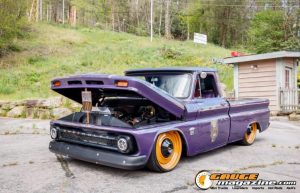 View Full Gallery
Issue
November 2019
Owner
Chad Hutchens
Ride
Whiskey Bent
(1964 Chevy C10 custom)
Meaning Behind the Name
Was txting a good friend of mine while both of us had a few to drink....shot him the idea...we loved it and we started working on it the next day
Photographer
Logan photography

What was the inspiration?
The truck was built on YouTube (the fab forums) as a shop truck. The truck had a huge group of followers as he added disc brakes, battery relocation and etc. with the final build video getting 125k views....they ended up naming the truck crown spoyal due to color and he added crown bottle to engine bay for coolant overflow.
How long did it take you to build?
2 years
Club Affiliations
XTREME LOWZ
Your future plans?
My plan was to change it up in a few years and make everything perfect for shows...but at that point I don’t want to be like everyone else and afraid it may take the fun out of it so I will probably body drop it soon and keep beating on it
Thanks to
My loving wife for putting up with my long hrs in garage and money that goes missing out of the checking account from time to time. My son Owen (5yrs old) for talking me out of selling it when I get agrivated with it. My parents for getting me into old vehicles at a young age. Kenny Franklin, Tabitha Combs, Darrell Poe jr, Brian Lucas, Rob Jones, Jerry Williams, Josh Walker, Lee Poff, Jeremy Farmer, Andy Harman, David Farmer, Greg Hutchins , and Gloria Cox for making the awesome crown seat!
Previous Rides
1994 dodge stealth, 2006 Chevy cobalt ss supercharged, 1963 mercury comet, 2011subaru wrx, 1965 vw beetle, Toyota starlet with 2jz swap, 1963 Chevy nova 2. And the list goes on 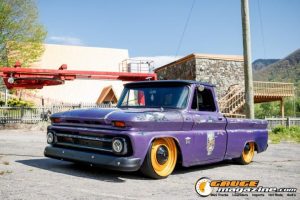