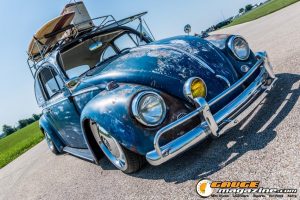 View Full Gallery
Issue
July 2020
Owner
Mike Hall and Amanda Robbins-Hall
Ride
DPNRUST
(1967 Volkswagen Beetle)
Meaning Behind the Name
Mike had a minitruck back in the day called DPNDEBT, this is just a play on that.
Photographer
Chris Gosda

Original Cost
1800
Build Cost
More than what the car is worth...
What was the inspiration?
It was our love child... a little bit of Mike and a little bit of Amanda. He was into slammed and lowered Chevy trucks and she is into Volkswagens. One day while looking at a patina Chevy squarebody, Amanda found the 67 Beetle on Craiglist and jokingly said, "let's just get this." Mike told her to contact the owner and they had within 24 hours. Mike immediately started making a parts list to replace all the chrome, Amanda did trade work to have custom Mexican blank interior (done by Mike Atchison) that was inspired by our vacation in Cancun. Amanda also owns a 2015 Beetle with Heritage Wheels, so they decided it would be cool to custom fit the same style wheels on the 67. The 2015 Beetle is "new meets old"... the 67 Beetle is "old meets new". A safari windsheild by LooseNuts was also added as well as extended pop-outs from Riverside Customs. We were able to make this car our own with lots of help and support from all our friends.
How long did it take you to build?
It's a constantly changing evolution. It was originally static dropped, but we added air ride suspension last year. Change roof racks and other subtle changes as we go.
How long have you been building?
Mike started restoring as a young boy with his dad, but got into customization with his buddy, Chris Atchisonc as a teenager.... from there he has never stopped. Amanda grew up with classic cars, but didn't start working on them until she became friends with Chris and Mike.
Club Affiliations
B-Town Vdub Club and Circle City Volkswagen
Your future plans?
Drive it and enjoy it, but you never know what might come our way.
Vehicle history
It was a rust bucket with no interior when we bought it
Thanks to
Chris Atchison (Conceptual Imagez), Mike Atchison (Kustom Kreations), Chris Schneider (Dub on Air Suspension), Jeremy Hatfield (Dirty Rides), Brian Daffron (Brian's Off Road), Chad Fish, Jeremy Brooks (VWLooseNuts), Chris Hubbell Blue (Riverside Kustoms), Frank Volbrecht (Virgil Stycklemeyer), John Behringer (Energy Control Systems)
Previous Rides
1973 Chevy Cheyenne, 1979 Monte Carlo, 1989 Chevy S10, 1996 Silverado, 2005 Chevy Silverado, 2004 Chevy Tahoe, 2010 GMC Sierra (present), 2015 Volkswagen Beetle (present) 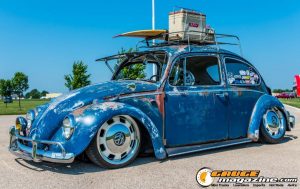 Owned by: Mike and Amanda Robbins-Hall