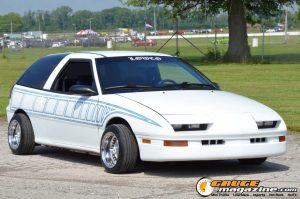 Original Cost
$1800
Build Cost
$5000
What was the inspiration?
The 90’s style of bow-legged compact cars was always a cool style in my opinion. At the time, in 1994, it was an economical way to build a cool ride on a reasonable budget. Especially with this Wagonback since it was so different looking. It always got people interested because of its body style.
How long did it take you to build?
It took the bigger part of 4 months. We did it in stages because of the money. The final big push was the interior/ stereo and exterior paint. I finished it in the spring of ‘95 and hauled it to a Lowrider Magazine show in Kansas City. We got 2nd place in Sub-compact/ Mild Custom.
How long have you been building?
I’ve been building since 1991 when I was 21 years old.
Your future plans?
I plan to show the car this summer along side my son Kynon with his Jetta Wagon and enjoy it in the “survivor” stage. I do plan to freshen up a lot of the body and interior and if you know me, it’ll be getting an extensive sound system.
Vehicle history
My wife and I, at the time, bought it from the local bank. It was a repo and had been being used as a route car for the bank. It was plain Jane and had a crushed in quarter panel on the passenger side. First we lowered it after driving it a while. Then we decided that we were finally going to build a full show car for ourselves. We actually bought the Roadster chrome wires with BF Goodrich Euro T/A tires then we started the body work and finished with an overall paint job with full graphics. Next was the interior and stereo. It had an Alpine head unit, 2 - PPI Pro-Mos 12 amps with 8 Volcano speakers. It competed in the 0-50 watt IASCA stereo class. We sold the car shortly after my son Kynon rode home from the hospital in it when he was born. We ended up selling the car in early 1996 due to needing a family car. Fast forward to the summer of 2020. My now 26 year old son set out on a mission to find our old Geo. Reaching out on Facebook pages and lowrider pages, we got a tip on who might have it. It took a few weeks or months but we contacted the owner. The car had been parked since 2001 and had been just barely off the highway that we traveled all the time! On January 31, 2021 we made the connection to go see the car and I took a trailer… Kynon, my wife Kimberly and I got to the home outside of Farmersburg IN. It was an emotional time waiting to see if it really was the car I had built 26 years before. It WAS in fact The car. The hunt was over and now the challenge was to bring it back to life. The goal was Slamology 2022. Kynon and I would be able to show our lowriders together for the first time. After finding a donor car that would supply a lot of critical parts, including a motor, we started the work. Kimberly Kynon and I worked countless hours to get the motor swapped, all new tires, extensive cleaning, and an all new suspension that Kynon helped design. We used Raceland coil overs made for a first generation Subaru Impreza. After new top plates designed by my engineer (Kynon) we were able to complete the modifications and our new suspension was complete. Soon the motor was done. Next was more cleaning and some airbrushing from my great friend Steven Summers. We completed the car with about 2 days to spare before loading for Slamology. Our dream was going to come true. With a third in its class and Kynon getting 1st in his class, Slamology was everything we dreamed it could be.
Thanks to
Thank you Kynon Johnson for your passion for cars, and never giving up on finding the old Geo. Thank you for all the wrenching, designing and support.

Thank you to my wife Kimberly for letting me chase my dreams always. Thank you also for being by my side for every bit of the process and working so hard on it With me.

Thank you to the entire staff of Slamology and especially Donnie and Ginger Babb. Special thanks to Double D! 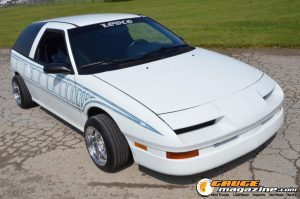 Owned by: Kevin and Kimberly Johnson

How to Change Address for a Driver’s License Canada

Why Buying the Cheapest Car Insurance is a Bad Idea

5 Things To Look For In A Forklift Dealer

Auto Repair Service Business 101: How Important Is Marketing To Customers?

Useful Tips To Follow For Always Being Safe In Traffic