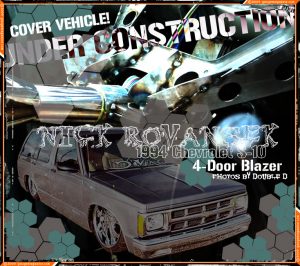 View Full Gallery
Issue
September 2009
Owner
Nick Rovansek
Ride
On Hold
(1994 Chevrolet Blazer)
Meaning Behind the Name
This Project has been Going on so Long that Other Things have Popped Up and Made Me Loose Sight of the End Project. So, One Year for Christmas My Brother had a Rendering Done of the Blazer and that was the Name Above it. He said Every Time I Spent Money on Something Else the Longer the Project Would be on Hold.
Photographer
Double D

Build Cost
20000
How long did it take you to build?
Too Long and Not Finished
How long have you been building?
10 Years
Club Affiliations
East Side C.C.
Your future plans?
1964 Impala SS Convertible, Round Body Dually with 24s
Vehicle history
I Sold My S-10 that I had Built from the Ground Up and Wanted to Build a Blazer, but I Wanted to Build Something that had Not Been Done Before and I had Seen a 4-Door Traditional Bd Years Before on 17s and it Looked Sick. I Wanted to Make Everything Very Hard so that Most People Would Not Try and Do the Same as My Truck. I Started Looking, and About a Week into the Search I Found the Truck on Auto Trader in Florida. I Contacted the Owner and Asked for Some More Pics and Info. After a Few Days of Talking we Came to an Agreement on a Price. I Sent Them a Deposit for the Vehicle and Said I Would Look for Plane Tickets. I got Tickets, Flew Down There, Stayed for a Week Vacation and Drove it Directly to Kentucky to Meet My Brother and Friends at a Show. After Driving the Truck for the Summer, We Began to Tear Into it and it has Been in My Shop Un-driveable Since 2003.
Thanks to
I Would Like to Thank My Brother Michael Most of All, Because if it were Not for Him I Would not have This Truck. He Co-Signed For it. Also, My Borther Did 99% of all Metal Fabrication and Welding on the Truck, Even if He did Not Want to Do It. He has Helped Shape the Truck into What it is Now and What it Will be When it's Done. My Family, Mom and Dad for Being Great Parents, and Especially My Girl for Never Second Guessing Me and Always Showing Interest and Patience With All I do. I Would Also Like to Thank Matt Sabo, Owner of Fatty's Chassis in Euclid, Ohio. Matt is Like Another Brother to Me. He has Helped do Countless Hours of Fabrication Work as Well as Supplying Me with Many Parts Needed to Help This Project Become a Reality, From March Serpentine Kits to Building My Fuel Cell. Jimmy Mineri for Dealing with me Being so Critical About Everything, His Workd on the Stainless Gas and Brake Lines, and Help Wiring the Motor and Truck in General. I Would also Like to Thank Todd Redenshek and Todd Wilt, Who Both Played a Large Part in Mocking Up the Chassis and Countless Other Things on the Blazer. I Would Like to Thank Johnny and Vlado Zivcic from Jet Maxx in Willoughby, Ohio, for Dealing with All My Crazy Ideas and Getting me Steel and Making Numerous One Off Parts at the Drop of a Hat with No Questions Asked and Usually for Little or No Money. When I Need Any Type of Automotive Parts I Know I Can Always Count on Matt Profeta from Affordable Auto Recycling. As Far as People That are on Board to Help in the Near Future I Want to Thank All the Guys from Auto Sound and Security in Willoughby, Ohio, Especially Ralph for Always Helping Me Out and Just Being a Good Friend. Also, Bob Farinacci and Jim Cozen fro Sunroof Restylers in Mentor, Ohio, for all the Interior Work in Collaboration with Auto Sound and Security. Companies That are Going to be Involved in the Vehicle Once Completed are as Follows - Evolution Autobody, Gauge Magazine, Air Lift, Oasis Wheels, March Pulley Systems, RCV, D&S Auto Motive, PowerMaster, JL Audio, Hooker Audio, Dynaudio, PPG, Flaming River, and Cleveland tire and Wheel.
Previous Rides
1988 Chevy S-10 Standard Cab Short Bed, 1993 Chevy S-10 Blazer 4x4, 1995 Chevy S-10 4x4, 1992 Chevy S-10, 1975, 1978, and 1983 Cadillac Fleetwood , 2003 Denali XL

Is Your Vehicle Ready for Challenges on Highways?

Common Camping Struggles and How to Overcome Them

What Type of Insurance Is Most Suitable for a Company Vehicle?

Simple Things to Know before Buying a Car

Choosing a Jump Starter for Your Car

Mistakes to Avoid When Involved in a Road Accident

What Will Your Personal Injury Lawyer Do After An Accident