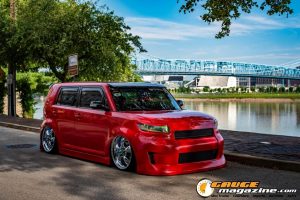 Original Cost
23,000
Build Cost
Unknown ( I'm not telling. Someone might be looking)
What was the inspiration?
I bought Scarlet new, in July of 2009. I had a passion for this car from the beginning, and for six years. she was intended to be nothing more than a nice daily driver. As time went by, and the mods kept coming, she started to take on my interests and personality. you can see plenty of modern aspects in her, but there are is also old school mixed in. If you were to ask, most people who are familiar with her, they would say the main feature of the car is all of the lighting features combined. They wouldn't be wrong, but in fact, my focus is based upon Rat Fink and keeping the memory of Ed "Big Daddy" Roth alive. His work had a big impact on me, as a child, growing up in the hot rod atmosphere. He had an outrageous view, which came out in his designs and car cartoon characters. I think a little of that comes out in Scarlet, at least I hope so. I want to be sure that today's younger generation has some level of exposure to the culture that Ed Roth left behind, even if it's just coming up to me and asking "What's with the rat stuff?" which they do. All of the old timers know exactly what Rat Fink is all about.
How long did it take you to build?
I started with small mods, right from the beginning, but in 2015 Jim Boitnott, the best custom paint and body guy in our area, told me that it was time to get another daily driver and it was time to convert Scarlet to a full time show car. When Jim speaks, I listen, so when I say that I have been working on her for ten years, the biggest changes have come about in the last four years. I get asked all the time if she's finished. My answer is always, she'll never really be finished, just at different levels of the build.
How long have you been building?
I have never had another show car, so Scarlet is my first and only. With that being said, I have been a car enthusiast since the 60's. I have build drag cars, dirt and asphalt oval cars, demolition derby cars, rail buggies and just about anything else that I could make go faster. Scarlet has helped me keep my passion for cars alive, when my old body is telling me that I'm not so young anymore, and it's okay to have a hobby that allows a slower, less demanding hobby.
Club Affiliations
I'm not really tied into any specific car clubs, but I enjoy hanging out with any that will allow me. I will say that my favorite club is Toyota Enthusiasts of Ohio, run by Anthony and Aubrey Reed. They have the best group of people I've had the fortune to meet, in all the time I've been racing or showing.
Your future plans?
I really don't plan much. I get an idea and I go with it, so my next move could be just about anything.
Vehicle history
I bought Scarlet new, ten years ago. Sponsors include: Boitnott's Custom Body and Paint Meguiar's Car Care Products NOWA Automotive Accessories Sickspeed Auto Parts
Thanks to
Thank you to my amazing wife, Mara, for putting up with all of the long hours it takes, to build, maintain and show Scarlet. Thanks to Jim Boitnott, for the amazing custom paint and body work. Thanks to Wilgus Sallie, for showing his 2006 Scion XB, Toasta, right next to me and Scarlet, at most of our shows.
Previous Rides
No previous show cars, but so many race cars. 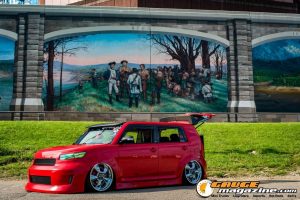 How to Change Address for a Driver’s License Canada

Why Buying the Cheapest Car Insurance is a Bad Idea

5 Things To Look For In A Forklift Dealer

Auto Repair Service Business 101: How Important Is Marketing To Customers?

Useful Tips To Follow For Always Being Safe In Traffic