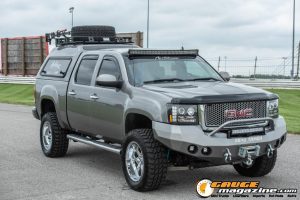 Original Cost
60,000
Build Cost
150,000.00
What was the inspiration?
When the owner was 12 years old, Audio 2000 demo'd a system with 12 18" subs to him, at that moment, he fell in love with big bass. Fast forward 26 years, Kirk came into Audio 2000 to begin this journey. We started with a few smaller builds, but we finally decided that it was time to go big, really big.
How long did it take you to build?
Due to the enormous complexity and numerous changes along the way, Audio 2000 spent about 2 years. There is so much custom fabrication in this build that had to be invented along the way. Custom alternator brackets to hold the 4, 370 amp DC Power alternators. The doors were created by fabricating the custom door off of the original door, then taking a fiberglass mold off of what we had built, then making a fiberglass door from the mold we made before. The woofer box and amp racks are made of, for the most part, a variety of plexiglass from 1 inch, all the way up to 2 inch thick plexiglass. All of the shapes, curves and port were hand made with power tools and a little CNC work too. The polishing was all done by hand. We also have to give a big thanks to Brent McKee, for his metal fabrication to join the cab and the bed, as well as the battery trays. We also have to give a big thanks to Dave Damitz for his extraordinary upholstery skills.
How long have you been building?
My name is Bill Wyko, I've been a professional installer for over 30 years. I've built over 14 manufacturers demo vehicles totaling over 30 vehicles at extremely high levels of complexity. The system consists of an Alpine restyle 9" head unit, Rockford fosgate 360.3, 6 massive audio 4 ch amplifiers, 8 Incriminator audio IA80.1 sub amps running at 18 volts. 4 DD Audio 9918, 18" subwoofers. 3 22" flat screens, one is motorized from the roof between the plexiglass amp racks. 2 9" headrest tv's as well. The charging system consists of 4 DC Power 270 amp outboard regulated alternators. The wire consists of over 100 feet of 4/0 GP audio double insulated power, over 200 feet of GP Audio double insulated 2/0 power & ground to wire the amps. The amazing power distribution was custom made by Jim Brokman at Jim's Macineworx, truly a work of art. The batteries consist of XS Power 40,000 watt lithium units, incredible how they can feed this monster so well.
Your future plans?
Our future plans are to remove this system, reinforce the entire truck, add plexiglass windows, an additional 4 18" subwoofers and about a ton of plexiglass to take it to the next level.
Vehicle history
The truck was purchased from Quebedeaux GMC here in Tucson then brought to Audio 2000 soon after for the build
Thanks to
Bill Wyko: Audio 2000 owner/installer/designer Dan Kirchenberg: Installation manager/ installer/fabricator/tuner Dave Damitz: Upholstery Jim Brokman: Billet power distribution fabricator DC Power: Alternators XS Power: Lithium batteries Douglas Dustmann: DD Audio rep Incriminator Audio: Sub amplifiers Massive audio: component speakers / mid/ high amplifiers 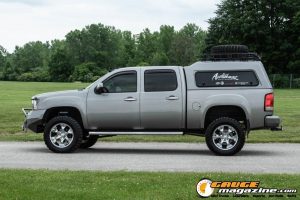 What basic car components should I know

A Beginner’s Guide to the BMW Sports Car

Customizing Your Car On The Cheap

Who Is Liable If A Customized Car Injures You?

Importance Of Car Care & How To Buy The Right Products

How Do You Actually Find The Right Car Wrecking Services?

How To Seek Compensation After A Multi-Car Crash