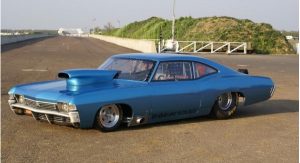 View Full Gallery
Issue
November 2014
Owner
Dave Evans / Andy Bennett
Ride
Doomsday Impala
(0 Chevrolet Impala (Fastback))
Meaning Behind the Name
Its a throwback to the cold war and the UK hardcore punk scene of the early 80's of which we were part. Protect and Survive a pamphlet distributed to the public in the late 70's early 80's about how to survive a nuclear attack, etc.
Photographer
various

Original Cost
$400 USD, rolling shell (wreck)
Build Cost
Impossible to quantify, we built this car in house and it took 5000 hours
What was the inspiration?
We drag raced a 65 Impala SS in full street trim in 1999, The goal was always to build a 7 second full size Impala from then on.
How long did it take you to build?
3 years, 5000 hours approximately
How long have you been building?
Watching since children, participating since 1999.
Club Affiliations
Never Again Drag Racing.
Vehicle history
Imported from Antioch California to the UK in 2007 as a rolling shell, minus trim, minus glass, minus engine and box. Just a solid rust free body. Professionally built chrome moly chassis to SFI 25.2 (Tagged to run 6.0). The rest of the build was done in house over a three year period.
Thanks to
Freeway Spares (Barry), Chris Rushton, Rob W, Alan O'Connor
Previous Rides
1967 Olds Delta 88 425cu, 1968 Impala SS427, 1965 Impala SS, 1970 Camaro, 1979 Camaro Z28

Frame Builder
John Webster Race Engineering
Front Shocks
Strange
Rear Shocks
Strange
Four Link
John Webster Race Engineering
Other Mods
In 2015 we will be running a 632cu naturally aspirated engine. This is being custom built at present by Jeff Bull Race engines. Current best ET is 8.6 with the 496cu motor. We are looking to be down into the 7's in 2015.

Dashboard
Ally panelled, custom Impala gauge cluster
Gauges
Autometer Carbon
Shifter
Precision Performance Air Shifter
Seats
Race Bucket
Upholstery Description
In 2015 we will be running a 632cu naturally aspirated engine. This is being custom built at present by Jeff Bull Race engines. Current best ET is 8.6 with the 496cu motor. We are looking to be down into the 7's in 2015.

Transportation of furniture when moving – how to choose the right car