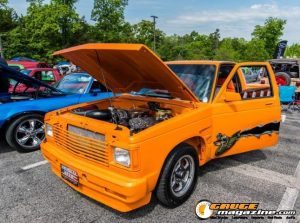 Relaxin in The Park 2019 was held at Jefferson Community College in Arnold, MO from May 18-19, 2019.  For this time show being wrecked by mother nature, they handled it like a champ and made sure that the show went on!

Only a few weeks before the show, mother nature came through with a torrential storm that caused a massive amount of rainfall and flooding.  This storm flooded the original location of the show; hoping that the flooding would come down in time they waited it out!  The flooding did not come down enough and with only a few weeks left, they decided to move the location to Jefferson Community College!

Despite every curve ball that was thrown their way, Relaxin in the Park 2019 managed to get a college parking lot full of quality cars.  Everything ranging from bagged minis, classics, imports, lifted trucks, full sized, and everything in between.  To raise the bar even more, they also had vendors lined up with t-shirt sales and more, multiple food trucks lined around the lot, two pinstripes striping vehicles and artwork, media on site, and more! 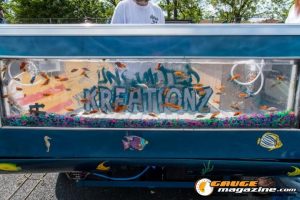 If you brought out your kids, then you know that there was one specific ride that they all could not get enough of, adults too!  One owner took their love for trucking and fish to the extreme and brought out a truck with a fish tank in the bed!

Day one brought out a nice, sunny, and HOT day but was perfect for the car show scene!  Day two, mother nature decided to remind everyone that she was in charge and would randomly drop heavy rain on the show.  After the last downpour, Relaxin in the Park 2019 went on and everything wrapped up with awards ending just in time for one final downpour!  The show has not announced its dates for next year, but don’t worry!  With a turnout like they had this year, it is one show you’ll want to keep your eyes open for next year!