Relaxin in the Park 2022 was held in Festus, Missouri from May 21-May 22, 2022. As with previous years, it always seems something comes up when the RA club tries to put on Relaxin in the Park. Their initial year was floods making them relocate the event due to their venue being flooded, then the battle of COVID in 2020, then this year (again) was the rain and storms.

The area had seen some rain in prior days so Friday the grounds were still fairly wet, but still had some sunshine as vendors and participants started rolling in. Saturday morning bright and early the event was met with some severe storms with crazy wind, rain, lighting/thunder and even some tornado warnings just outside of the area. Once the storm passed, the rain continued on most of the day for Relaxin in the Park 2022. 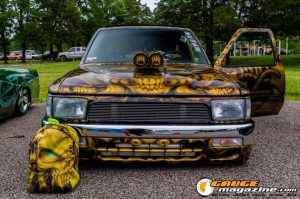 With the show field flooded and muddy, the park in Festus is surrounded by concrete drive paths (that part was also part of the cruise route) that allowed participants to park on ‘dry land’ and now sink in what ended up being dubbed ‘Relaxed in the Swamp’ by the end of the weekend. By Sunday the venue was still wet (due to rain the night before) but the weather was a little more cooperative on Sunday for a few hours of judging, show and awards.

With the weather being a bummer, the show still brought in well over 100 registered vehicles on site even though the weather did keep some from making the drive to the event. To go through all of these obstacles and still put on an event, the crew from relaxed deserve some praise. Hopefully Relaxin in the Park 2023 will be a better year for weather for them as their new event venue and town are great and have plenty of room to grow.