SEMA 2021 2WD Trucks was held in Las Vegas, Nevada from November 2nd-5th at the Las Vegas Convention Center.  Many may think that 2WD trucks won’t have much to show, but at SEMA 2021, that is the furthest thing from true.

As always, every ride that attended was unlike the next, but one that everyone was completely blow away by was the 1947 Fargo FL1 Pickup AKA “Chain Smoker.”  The vehicle was left in a field, weathering to the element. Others may see the vehicle and think it’s just a junker, but that is not the story for this vehicle. 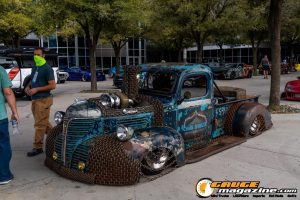 Owner Warwick Andrews decided that the weathered exterior was too perfect to paint over, but the image he had was one that would take hours to do and he was ready.  Putting his wielding skills to work, Andrews welded chains from the back in order to create a floating illusion.  Other customer fabrication work from Andrews is the rearward exploding chain stack structure and a swooping rear bumper.

He kept the large radiator up front but did move it forward 7 inches from where it was originally. Where the front fender met the grille, Andrews filled the area with 26 rows of vertical chains that he cured to match the flow of the body. That isn’t the only thing that is covered with chains. The four fenders and side steps were widened with a 7-inch chain body kit that required over 300 feet of chain taken from a 1940s decommissioned elevator.

It doesn’t stop there for this 1947 Fargo FL1 Pickup, the engine even has a history; a 12-valve 5.9-liter Cummins diesel crate engine, which was originally intended for agricultural vehicles.  Many aftermarket performance parts were added to the vehicle as well, but all in all, this vehicle is AMAZING.

One vehicle may have stood out the most to us, but all in all the 2WD vehicles continue to steal the show for us!