Slamology 2022 Awards was held in Brownsburg, Indiana at Lucas Oil Raceway from June 10-12th, 2022. With all of the hardwork and dedication, the least we can do is give an award as appreciation!

Each year, we give out close to 100 awards for 1st-3rd place in each division.  From there, awards are also given for IASCA, MECA, USACi, and Bass Wars.  All awards and unique and very special to us, but there are also some awards that we hold dear to us at Slamology. 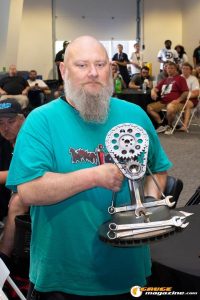 The Ricky Burke award is one that is not just given to anyone. It goes to someone who holds the perfect example of what Ricky was all about; being kind hearted, caring, and having a huge part in the car show world. There was no question on who was to be given this special award this year; Dave Mattingly.  Congratulations Dave, keep on doing what you are doing!

Another Slamology 2022 Award that we are very excited for is the Hats Off Award.  This goes to a Slamology Staff Member that has shown their dedication and love for our show.  This year, that award went to Kevin Holt AKA Gramps.  Many of you may have seen Kevin throughout classing, judging, or maybe just throughout the event in general.  He works this event as hard as he can ever year and has never given up.  We appreciate you more than you know Gramps!

Although every ride for the Slamology 2022 Awards deserve a trophy, our judges work hard and deliberate for hours to make sure that those who get the award deserve it whole heartedly.  We had so many winners this year we cannot post them all, but our specialty awards went to:

Congratulations to all winners!