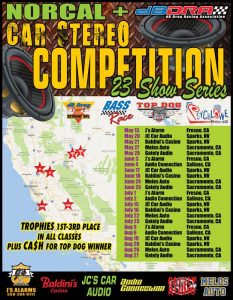 The dB Drag Racing Association is pleased to announce a 23 Show Event Series in Northern California and Western Nevada for the 2017 competition season. The series will take place from May – August and be held at 6 different retailers throughout the series. This is the second season for the series to be offered as it was well received by the competitors and retailers last season. All of the events will be officiated by Doug Stockton of Sonic FX Audio. Doug has been a certified DBDRA judge for more than a decade with over 200 shows under his belt. According to Stockton, “I am really excited for this year’s Norcal event series. In addition to Norcal, we have added 2 locations in Sparks, NV. I think the addition of Sparks will give more competitors an opportunity to compete.”In addition to the NORCAL 23 event series, several of the judges on the West Coast have teamed up to host the West Coast Finale Tournament on September 17, 2017. A portion of every entry fee from participating events go into a prize fund. For competitors to be eligible for prizes, they must participate in FIVE events throughout the season by any of the participating FIVE event promoters. Finale Tournament details can be found on the Sonic FX Facebook Group. http://www.facebook.com/groups/512432952113335/?ref=br_rs

The West Coast judges are off to a great start and looking forward to a big prize fund at the end of the season. Details on the West Coast Finale Tournament will be rolled out as the season progresses. Make sure to stay tuned to Gauge Magazine for coverage from these awesome Db Drag Events.