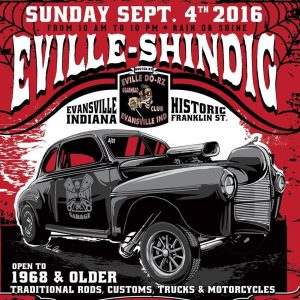 Eville Shindig 2016 was held in Evansville, Indiana on Historic West Franklin St on September 4, 2016.  The show is always held on the Sunday before labor day and welcomes traditional cars, trucks, and motorcycles from 1968 and older. Eville Shindig 2016 also has a pre-party held a day before the show at Pistons Bar, come and drink before a wild show the next day!

The show also has vendors ranging from clothing, food, auto parts, pin striping, and even a hairstylist, for when your ride looks better than you! Along with the vendors, the show also hosted a tattoo contest, pin up contest, and had rockabilly bands playing the entire day just for your enjoyment.  If you are an old soul, this show is definitely one you would not want to miss! Eville Shindig 2016 had everything you could ask for, even a bar! Pistons bar rocked all day and was ready to quench your thirst with your drink of choice.  The show also has a pre-party held a day before the show at Pistons Bar, come and drink before a wild show the next day!

Awards are also given to those with the best cycle, best rat rot, best hot rod, best kustom, best lowrider, and more.  Also, at the pin up contest the winner is announced Miss Eville Shindig!

Eville Shindig 2016 has their website up and running with information for next years show and pre-party.

Looking for more coverage by Gauge Magazine? We have years of previous content from all around the United States!