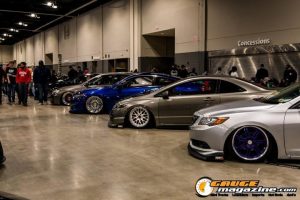 Tuner Evolution 2018 was held in Chicago, Illinois on October 7th, 2018.  Just like many other shows from last year, Tuner Evolutions outdoor part of the show suffered from a rain storm that came through, but you better believe that didn’t stop anyone from coming out and enjoying their time!

This is the 2nd year for this show to be held in Chicago and they have made serious name for themselves!  Tuner Evolution 2018 had their show split between and indoor and outdoor show, both parts bringing out some of the best rides from the surrounding areas.  Between the spectators that attended and the amount of custom rides, they had an amazing turnout for their 2018 show!

Many of the spectators came to the show not only to check out the rides, but many also came to see their favorite Youtube celebrity TJ Hunt. TJ Hunt has 1.4 million followers on Youtube where his content contains car reviews, shows he attends, and customizing ride after ride after ride!  Fans were wrapped around the building just to meet TJ!

All of the rides that attended were amazing and made this event just even better than the year before.  But there was one ride that everyone was obsessing over and that is the Mercedes-Benz W126. This beautiful machine was rocking a era-correct BBS mesh and ALOT of executive flavor.  This is one ride that we would have had no probably leaving the show in and many others felt the same way!

If you are wanting more information on Tuner Evolution, you can check out their website for more locations and shows!  This is one event you’ll want to make sure you make it out to.

Wanting to see more of Tuner Evolution? We have coverage from their last year show which was their first time in Chicago!