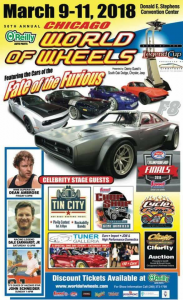 Chicago World of Wheels 2018 was held at the Donald E. Stephens Convention Center in Rosemont, IL from March 9-11, 2018.  The Chicago show is more than just any regular World of Wheels, it is also home to the ISCA Championship finals, the Cycle Rama, Gene Winfields live Chop Shop demonstration, and much more!

The show brought in a lot of people wanting to catch a glimpse of classic muscle cars that were turned into amazing showpieces.  People come from all around to see the craftsmanship of what the rides once looked like and how they look now redone.  If you are someone who is interested in seeing the older rides redone with a touch of the new stuff, then Chicago World of Wheels is for you!

Each Hall inside of the convention center had its own exclusive show within its own area.   Tin City showcased nothing but nostalgic and fully custom leadsleds, Cycle Rama showed Chicago’s premier custom motorcycles, and every hall were packed full with street rods and muscle cars, including Ridler of the Year vehicle of display.

It was no surprise that the quality of these cars were nothing but spectacular. The entire center was filled with brilliant colors, bright chrome, and an air of creativity. Everyone who attended was welcoming to one another but still had a loving competition when it came to each of their rides.  You could tell that the owners of each ride worked relentless hours to make sure that their ride reflected the hard work and love they have for their lifestyle.

Wanting to see some amazing Lowriders?  We’ve got that coverage that you’re looking for!